In Sickness and Health 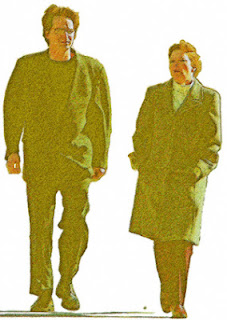 I was doing a bit of grocery shopping late Saturday when I ran across a woman I hadn’t seen in at least a couple of months.  She was carrying a snack tray of cheeses, pepperoni slices and the like and all the things you’d need to share a weekend movie at home with your three kids, two small boys and a preteen girl.  It was the beginning of a rare full two weeks being home and she and the kids had some catching up to do.  Her youngest was starting kindergarten in the fall and he resented her being gone most of the time.  Her other son was close to his dad and kept his opinions to himself.  While she was away she missed a band concert that was a very important milestone in her daughter’s life.  It’s a crazy time for all of them right now what with Dad getting his own apartment during the spring and, of course, all the tense back and forth that goes with a long time couple trying to disentangle a relationship that has unraveled to the point of hiring lawyers and filling out legal documents.   You hope to remain civil for the sake of everyone but the trauma felt is right up there with the death of a loved one.

Recently I heard it said that love is easy but living together is difficult.  Love is mostly fantasy while the effort at holding a relationship together is real work.  I think that’s true to a point but it would be misleading to assume commitment alone can make for a successful pairing.  The anthropologist Margaret Mead believed life too long and humans too complicated to reasonably expect most marriages to last a lifetime.  There’s plenty of evidence to support that view but, for me, her opinion only enriches the value of the rare couple that remains intimate and mutually engaged through the course of their lives.  Love alone does not conquer all.  The obstacles that must be overcome are many, diverse and, sometimes, totally unexpected.  The give and take required of individuals to keep a relationship on the tracks will include incidents of bruised feelings and ego deflation.  Any one decision has the potential to drastically change the nature of the relationship.  Let me provide for you the dilemma faced by another couple I know.  Both the man and the woman had very successful, lucrative careers.  After many years the husband’s firm decided to relocate many miles away in another state.  It was decided Dad would give up his job rather than uprooting the family from a place and circumstance they loved.  Mom continued to grow professionally and prosper financially but the husband’s field was very specialized and career opportunities for him in the area were nearly nonexistent.  His various efforts at restarting a career were disappointing and the resulting imbalance in the relationship helped to create an insurmountable barrier that led the two one-time lovers to eventually call it quits.

I admit my view of romantic love between two adults is mostly based on biology and the intense attraction experienced at the time of falling in love has little to do with civilized human reason.  How can anyone expect to make sound judgment decisions while under the intoxicating influence of being in love?  How often is it that people choose as a lifetime mate someone hopelessly unsuitable for them because to do otherwise is like swimming against a very powerful current?  We truly are swept off our feet.  Even when that special someone seems thoroughly compatible it can prove to be illusionary to think it will always last.  People have a remarkable ability to grow and change with the circumstances of time.  Two people starting life together thoroughly in love may find themselves growing in different directions and in ways that, horror of horrors, they one day discover they are strangers living under the same roof.  Nature has a way of making folly of our best intentions.  I am not arguing against marriage or other less formal human relationships.  What I suggest, though, is that when happiness dissolves into bitterness and the resulting hurt leads us to lash out at the crimes perpetrated by our partner, we resist our urge to feed anger and hate.  Life makes fools of us all.  We don’t conquer it.  We abide.  We learn.  We live another day.

Posted by coldValentine at 2:27 PM