Letter to My Son
Sunday, 20 January 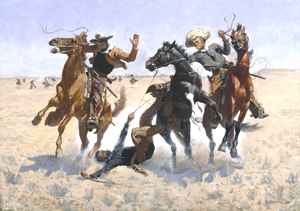 Frederick Remington’s iconic Western scene, Aiding a Comrade, depicts the possible doom of three horsemen at its most precarious moment.  While hotly pursued across an arid plain by a band of hostile Indians, one of the three riders falls from his rearing horse.  Has the fallen man been shot?  Was his mount reacting to being struck when an Indian discharged his rifle?  The answers here are critical to the actions available for the two remaining riders.  Having precious few seconds to react the men must decide who to save and how to go about it.  Reasoned thought is fractured by the charged emotions of those facing imminent death.  Remington has carefully portrayed this moment of climatic desperation in order to confront you with the question, “What is it you would do?”

There seems no palatable choice.  Valor would have the two remaining riders stay and die defending their stricken comrade.  The alternative is flight, dooming your companion in order to preserve your chance at continued life.  What if you dismount, determined to fight, only to have the third rider continue to flee, deserting you both?  Is it possible you’re the one riding off in panic?  Glancing back over your shoulder you capture the image of your betrayal, the merciless death of two men, whose names and faces will confront you daily for the remainder of your days.

Remington’s painting skillfully captures a moment of high adventure but his art sweeps you into the drama, determined to prod you into revealing something of yourself to yourself.  Chances are you can’t answer his question with any certainty.  But your own lack of clarity as to how you would react is what gives the painting its great emotional power.  Would you readily stay with the fallen man were he your cherished brother?  How likely would you fight and die for the man were he but another hired hand you hardly knew?  Maybe it shouldn’t matter but it probably does.  If you’re the one choosing to flee then what value do you place on this life you saved for yourself?

Can you imagine a life of mornings waking to the question, “What kind of person am I?”  If you don’t like the answer what is it you need do to change it?  What acts of redemption are there to lift one’s burden of guilt?  Fortunately few people are confronted with the decisions faced by the men in Remington’s painting.  We can breathe easily, comfortable with the fact we are more valuable alive than were we to be dead.  Our honor need not be brought to question by severe circumstance.  Our character can be built upon daily acts of kindness towards others.  We are free to peaceably reinforce the qualities of just living.  Too often violence results not only in physical death but it also takes away the lives of those who remain living.

A comic book illustration, an action movie sequence often has terrific entertainment value.  Something we like to think of as art provides us paths of conversation we might not normally consider, and for good reason.  Those discussions can lead us to dark places.  Undoubtedly it has its redeeming value but, like a tablespoon of cod liver oil in the morning, a little goes a long way.

Posted by coldValentine at 2:30 AM