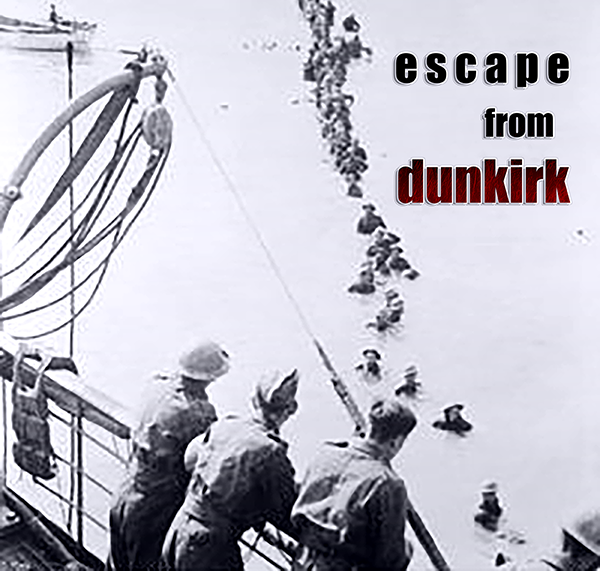 You'd think it would be congratulations all around amongst

German high command, what with French and British troops

in close pursuit.  His lead units in sight of Dunkirk with little

to prevent them from bagging the cat - capturing Britain's army.

Battlefields are a confusing place to make snap decisions.

on hunches and intuition.  Stuff that isn't easily taught.

Then, too, it's more muscle memory than Ouija board.

On this morning Guderian's boss, Gerd Rundstedt, gets a visit

from an anxious Hitler.  The Fuhrer is feeling very insecure

about his vulnerable, widely dispersed armor.  He apparently

"Halt in place.  Dunkirk is to be left to the Luftwaffe.

Make use of the period of rest for recuperation. "

After the war Guderian pointed to this decision by Hitler

as the one costing Germany the war.  Letting the British

France lost because of Britain's failure

morning:  visited by Hitler / believed to be anxious

armor with significant loss of strength

foot soldiers haven't caught up with armor to provide

"alarmed about armored formations because

they were in considerable danger in a difficult

country, honeycombed with canals, without

being able to attain any vital results."

"the armored formations to be stopped, the points even taken back."

Halder:  Dunkirk cleared for the British

attack on the line Dunkirk-Hazebrouck-Merville was to be discontinued

Hitler orders halt.  Dunkirk is to be left to the Luftwaffe.

Make use of the period of rest for general recuperation.

"The only effect of evacuating Calais would be to

transfer the forces now blocking it to Dunkirk.

Calais must be held for many reasons,

but specially to hold the enemy on its front." 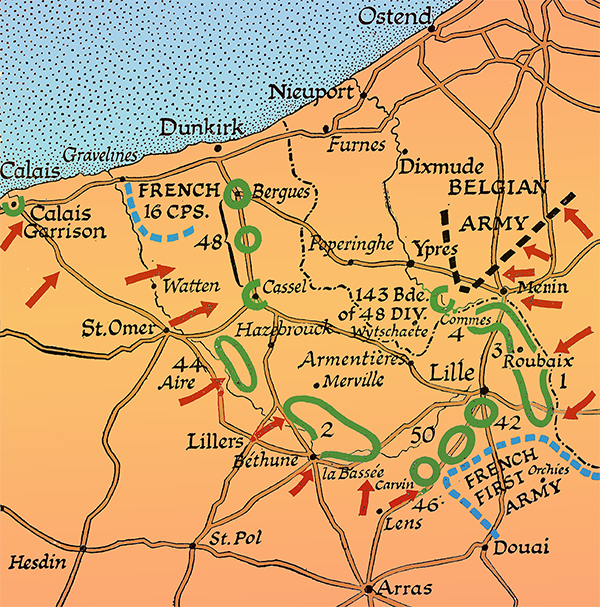 1. The British need to find reserves to extend their flank

beyond Ypres to replace the quickly crumbling

Belgian Army to their north.

must withdraw from their defense of Lille or soon

be encircled by two armored pincers.

3.  A critical battle underway to prevent Guderian from

cutting the main road for escape to Dunkirk, that extends

through Bergues and out beyond Cassel.

evacuation through Dunkirk only option

"I must know why Gort gave up Arras, and what

actually he is doing with the rest of his army.

Clearly, he must not allow himself to be

encircled without fighting a battle." 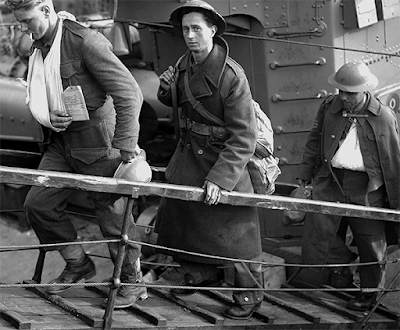 "The picture in the channel ports is as follows.  Big ships come up

the quayside, boards are put down and the men crowd on the ships.

All material is left behind.  But we are not keen on finding these men,

newly equipped, up against us later." 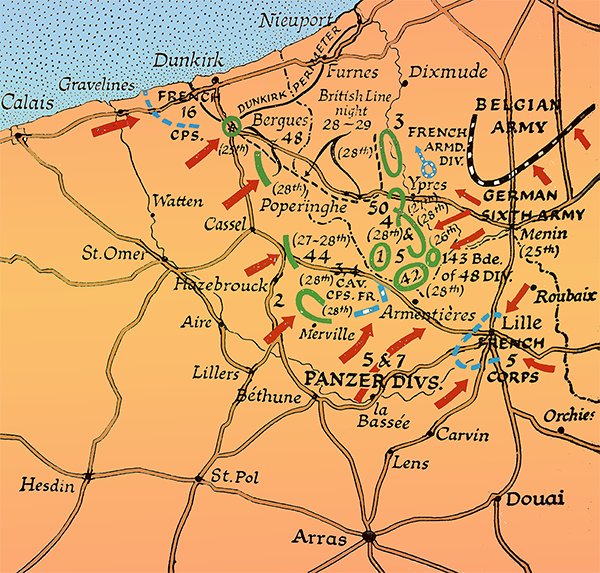 The Belgian line is broken.  Contact with the British lost.

50,000 French POWs taken at Lille but their holding out

for 3 days enabled many more to escape.  All Allied forces

withdraw into a tight perimeter defending the beaches

"In these dark days the Prime Minister would be grateful

if all his colleagues in the Government, as well as important

officials, would maintain a high morale in their circles; not

minimizing the gravity of events, but showing confidence in

our ability and inflexible resolve to continue the war till we

have broken the will of the enemy to bring all Europe

gathering vessels of all kinds and sizes 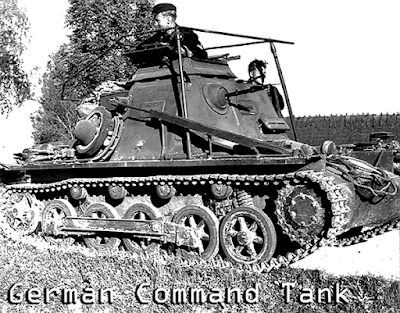 British lock those wanting to surrender in cellars

dispatched all available craft to the beaches immediately

cutting off escape to Dunkirk

refuses to join Gort's forces in retreat from Lille 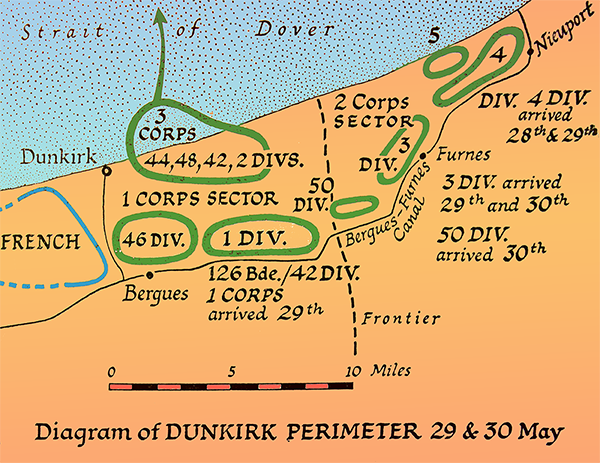 encircled and captured at Lille 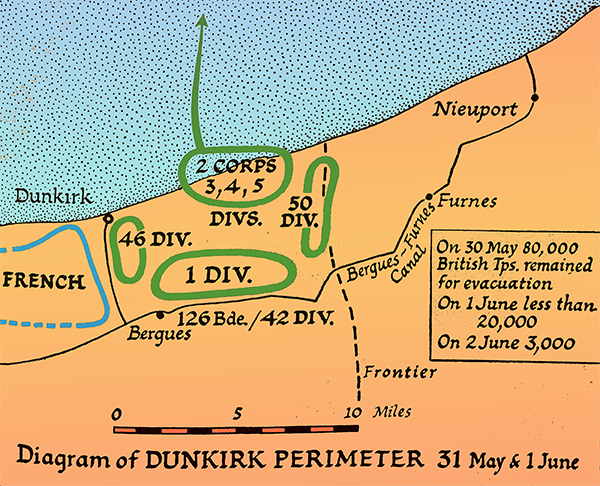 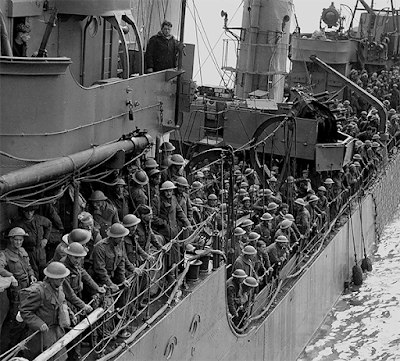 greatest effort over Dunkirk on this date 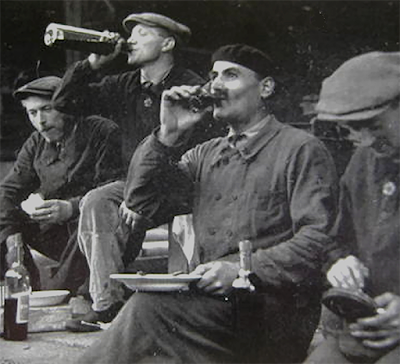 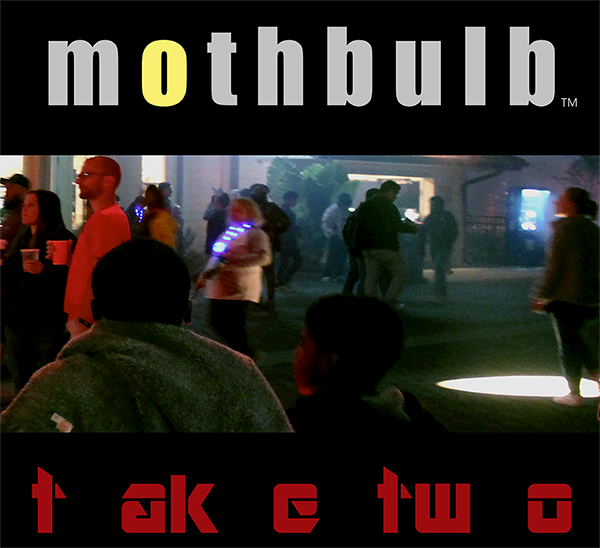