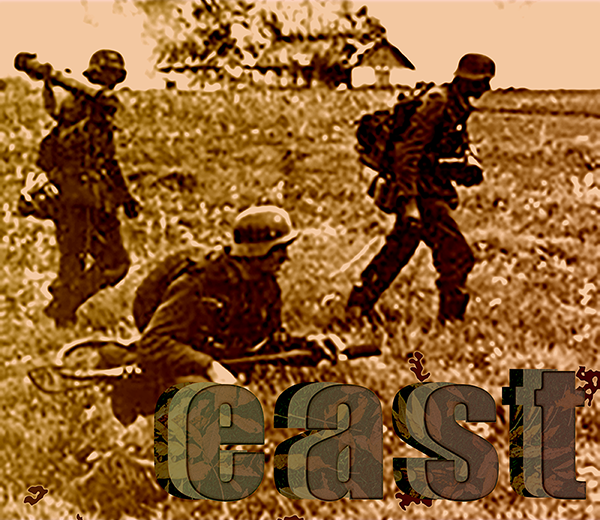 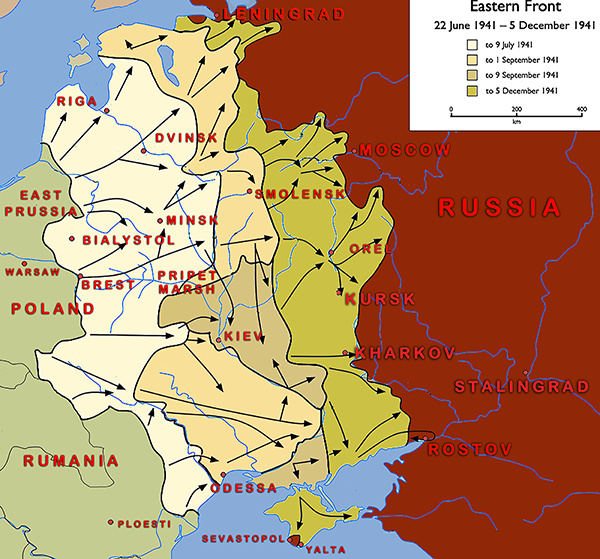 The quarrel among Germany's military leaders as to
how to defeat the communist colossus next door
continued unresolved even as plans were committed to action.
The military solution being the destruction of the Red Army
after having first pinning it down to a head-on all-in contest.
Hitler's generals believed only a direct assault on Moscow
would force Stalin to put everything of value on the line -
not only Moscow but Russia, the future of Marxism,
and the dream of the Communist International.
Hitler's objectives included both political and economic
goals as well as the destruction of the Red Army.
Germany would benefit greatly from accessing the wealth
of the Ukraine while simultaneously depriving the Soviets
of these resources critical to their war effort.
Leningrad wasn't quite as urgent an objective but still Hitler
placed it as one of his three initial targets of strategic importance.
Dispersing German military might over three broad fronts
was unimaginable among top Wehrmacht brass if the priority
was to be about bringing a quick victory.
That was the consensus, anyway.
Hitler is not dissuaded and has his way. 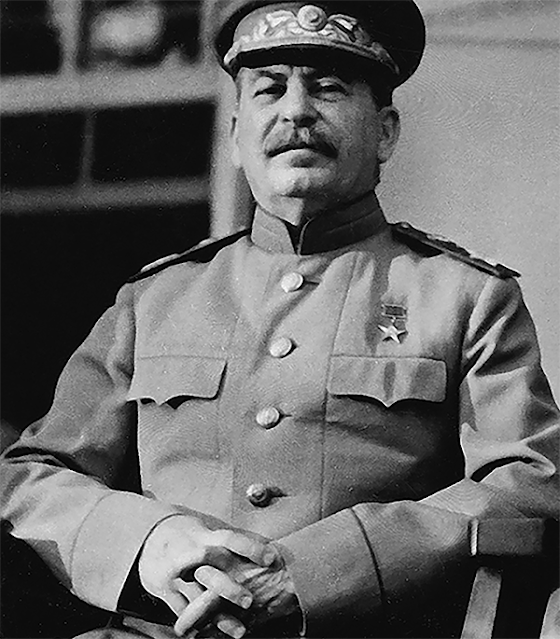 Stalin believed Hitler wanted the Ukraine more than Moscow
or Leningrad because of Germany's pressing economic needs.
Despite strong reservations the Red Army shifted military forces
from the area of Minsk south to the front lines of the Ukraine. 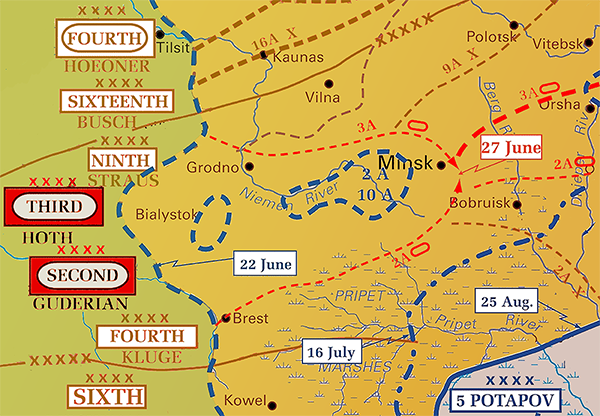 The objective of this armored thrust was to swallow up
as much as you could of the Russian army in one great gulp.
You only want to face them once.  In this instance it mostly worked.
Two German tank armies reached out two hundred miles and
brought into their grasp three hundred thousand front line
troops of the Red Army.
German victory would require just this demonstration of speed.
Berlin celebrates but problems appear.
Once the two panzer formations link up at Minsk
their blitzkrieg engines turn to idle.  They sit around
for days waiting for the foot soldiers to catch up.
Their own so-called noose is leaking Russians
because German containment relies on thinly
dispersed troops conducting patrols over large areas.
Meanwhile the Red Army is taking advantage of the lull
to further fortify its defenses around Smolensk, the next
big objective on Hitler's road to Moscow.
The delay helped make Germany's battle for Smolensk
costly to a degree they hadn't yet experienced until now.
. 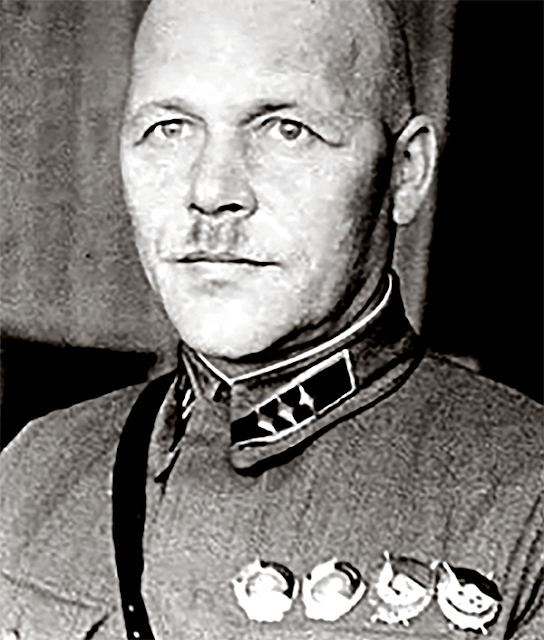 General Dmitri Pavlov and his staff were made the scapegoats
for the disaster that befell Russian troops 22 June.
Within a week of the initial action these officers were arrested
and charged with treason.  Charges were subsequently dropped
to cowardice and incompetence but they were quickly shot,
all the same. 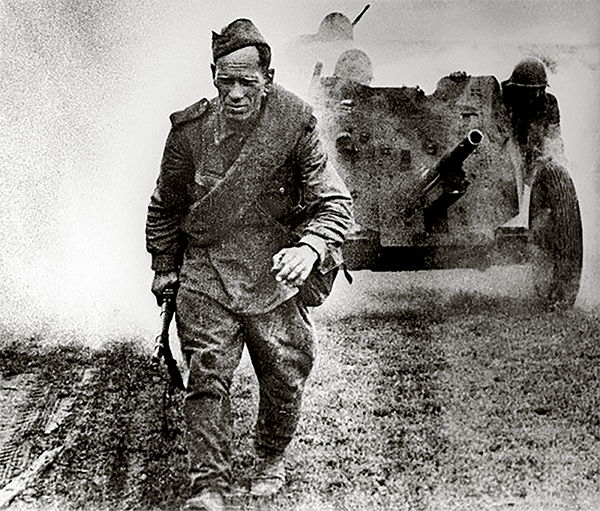 What's wrong with this picture?  Not the old man.
How do a couple guys pushing around a heavy antitank gun
hope to compete with the rapid maneuvers of a tank?
You don't.  Caught in wide open spaces like this it's bye-bye.
Still you go through the motions because maybe you get lucky
and take someone with you. 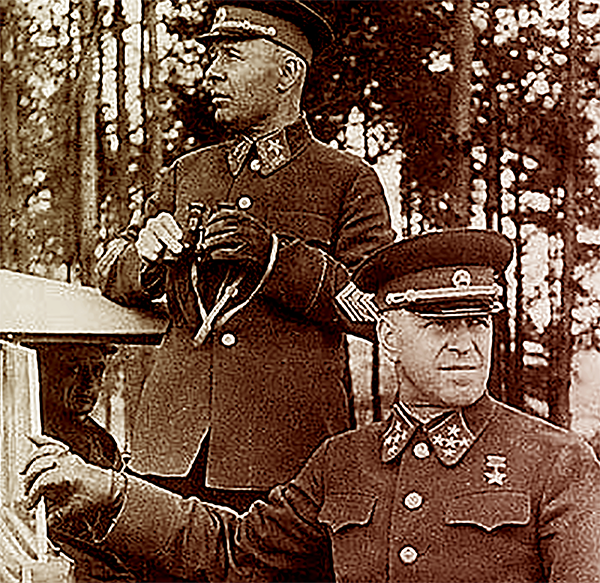 General Timoshenko, Stalin's man overseeing the Red Army,
is sent to the front to plug the hole left by Pavlov at Minsk.
The man wearing the Red Star next to Timoshenko is
Marshal Georgy Zhukov - the Russian most responsible for
Germany's historic defeats on the eastern front in World War 2. 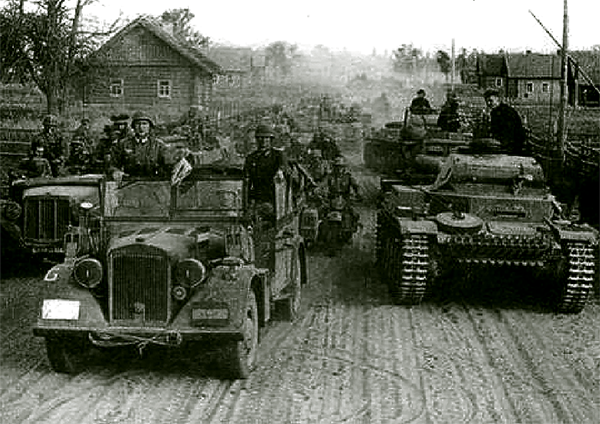 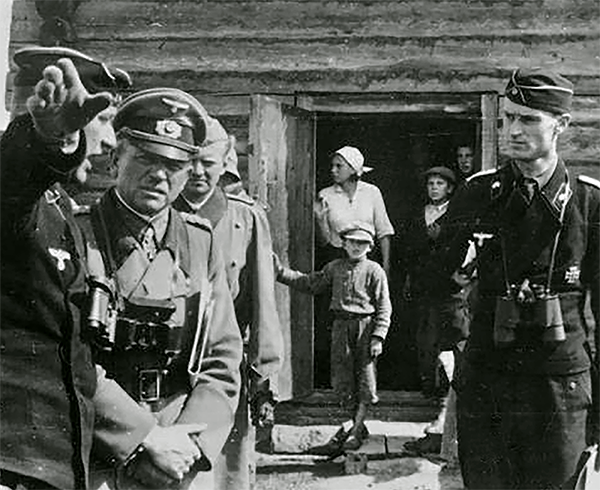 Guderian's 2nd Panzer Group brings up the southern arm
of the envelopment. 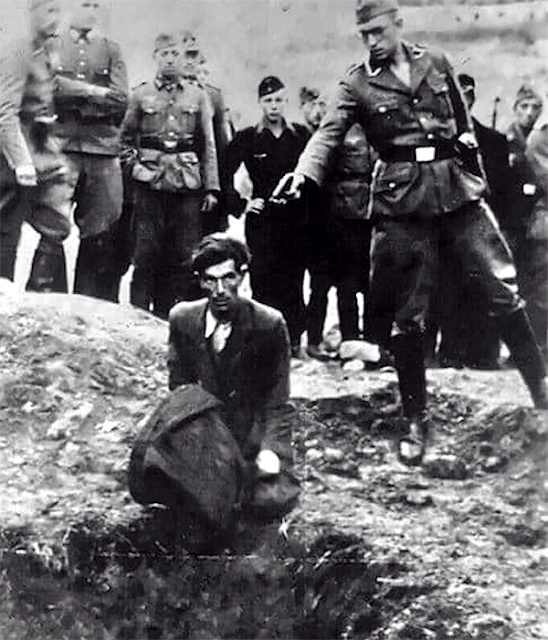 The last Jew of Vinnitsa.
Hitler's political aims conflicted with his military goals.
Germany's one realistic chance of victory over the Soviets
would be to have Russia implode - overthrowing Stalinist rule.
There were, in fact, parts of the Russian population, particularly
in the Ukraine where German troops were welcomed as liberators.
Initially.  In the wake of the front line came the Nazi Special Action
troops.  They quickly eliminated elements of the community
they understood would be obnoxious to the landscape's
new landlords. 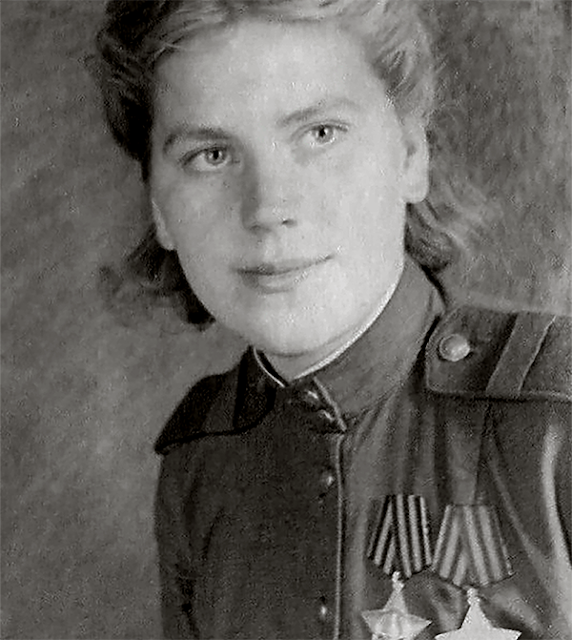 Roza Shanina was decorated for having 59 confirmed kills before
she herself was killed shielding a fallen officer from enemy fire.
Women made up a large number of the snipers deployed
against the Nazis in Russia. 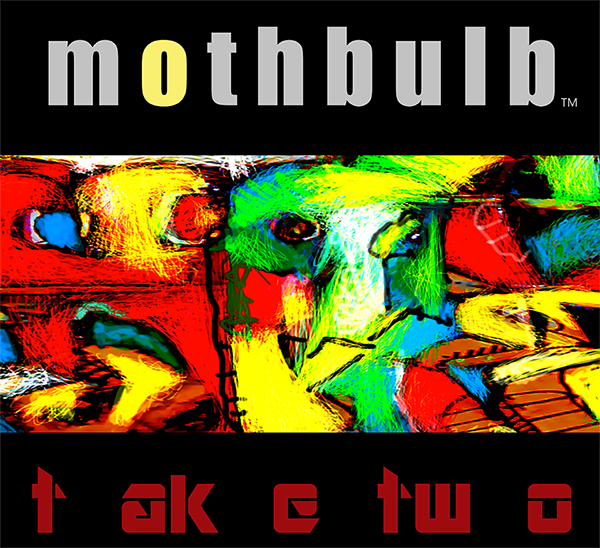