Letter to My Son
2 December, Sunday

Life is what happens while we are busy planning other things.  I heard it yesterday.  I've heard it before.  I keep forgetting how true it is.  Still, I wouldn't change our approach. We are so vulnerable to life's random inequities as individuals but a society of persevering individuals has a way of giving reality to great achievements.  After all, biologically we ourselves are made up of nothing more than a trillion plus expendable single cells united together in producing a single, absolutely remarkable consciousness. 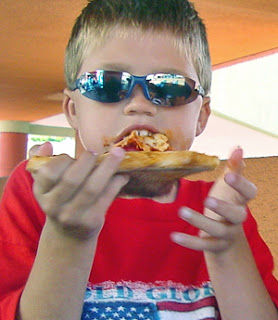 I remember my grandparents’ phone number of umpteen years past:  5–1670.  It’s one of those small pieces of information that persists in memory without effort.  I remember not liking the taste of a cupcake piled high with too much frosting while eating lunch one in the cafeteria when I was in the second grade.  I remember trying to read a Black Hawk comic in the gloom light of the earliest rise of an sun one December morning in 1957.  Then there is the feeling of eating spring onion in scrambled eggs while sitting across the table from a woman I hardly knew and would never see again.  Even as we struggle with memory at an age when the mind looses its flex much like one’s joints there remain obscure facts, thoughts and impressions that litter our consciousness much like long forgotten shoes scattered among lint balls, waiting for rediscovery beneath one’s familiar bed.

What mechanism locks random bits of life forever into our existence?  Or do you believe these stored everyday dribs and drabs to be nothing more than an untidy attempt at biological file keeping?  I certainly believe physical reality is dictated by some broad rule of cause and effect.  At the same time I think biology provides a very imperfect vessel to sustain life.  It does its best to improve upon its design but it all appears frozen in place during the course of a single lifetime.  Take the example of the once useful appendix that is in the process of a slow motion dissolve and will outlast the configuration of our own species if our efforts at genetic self-redesign ignore it.

I know little of the science of biology.  I mostly speculate from the layman point of view.  I’m comfortable with the thought that music lures misplaced memories from dark, musty corners.  The emotions expressed in a song often reintroduces us to similar emotions associated with a long forgotten event.  An easy example of this is when the early feelings of romance is reestablished when a couple, once again, hears their song.  Of course, current circumstance will lend its own flavor for each participant and the favored emotion may no longer be shared, at least not in the hoped-for manner.

The point I’m circling with all this is that I think any memory of lasting endurance is associated with emotion of one sort or another.  It isn’t at all surprising to long remember the phone number of dearly loved grandparents.  Imagine how disturbing it would be for a child with a near indiscriminate sweet-tooth to toss out a cupcake thick with frosting because of its hideous taste.  I remember absolutely needing to read a particular comic book adventure, too impatient for daylight while, at the same time, considering the motherly admonition that all this eye strain will lead me to blindness.  Breakfast with a woman can evoke powerful domestic impulses even though other considerations reduce the relationship to one with no future.  Every memory relies on a linked emotion of uncommon degree if it is to bridge decades swollen with new experience.

This all seems plausible because they involve fundamental human experience, steeped with feeling.  How, though, do we explain memory involved with retaining an understanding of something algebraic – for instance, using the square root to solve a quadratic equation?  What is the emotional link utilized here to impress upon memory such an abstraction – seemingly dry of human content?  Well, if you have no interest in math you will probably rely on rote memorization – mental tricks that will enable us to retain a thought long enough to get us past an exam or some other form testing our mental retention.  People that flourish in math, or any field of study, are said to have an aptitude for that subject.  Can someone show an aptitude for something in which they have no interest?  It doesn’t seem likely if by a personal aptitude we intend to identify the endeavors where one is most likely to succeed.  Interest alone does not guarantee mastering a subject.  One’s mental capacity is obviously critical.  But mental capacity alone is also inadequate if one is to achieve something more than a superficial appreciation of difficult subject matter.  The motivating promise of wealth and status in return for a subject’s mastery is no substitute for one’s own compelling interest in the matter.  Is interest emotion?  It is experienced subjectively, isn’t it?  When we focus on topics interesting to us, we gain emotional reward.  When we are deprived of interests, we feel desolate.  We suffer long lines and boring lectures.  We are enthralled by a favored video game.  If we remember details of waiting a long period doing nothing it is because of the intensity of emotion that experience evoked in us.

Can I say that all intellectual processes are in some measure fueled by emotional energy of one manner or another.  It seems to follow to me but let us think on it together.  Differing minds with contrasting emotional motivations can arrive at surprising conclusions.  There are just too many variables in reality for any one mind to process – or remember.  In fact, Jack, I can be so caught up in my train of thought that I forget the whole purpose of writing this letter in the first place.  Enjoy all the great football playoffs during this month.

Posted by coldValentine at 11:14 PM