Letter to My Son
Sunday, 30 December 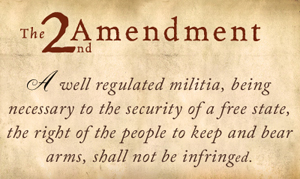 Erwin Chemerinsky’s Constitutional Law is your standard-sized college textbook.  It’s appendix includes the text of the U.S. Constitution.  It’s seven articles were written in 1788.  The first ten amendments were added in 1791.  Together they take up just over ten pages.  The remaining seventeen amendments add another five pages to the document.  That is the entirety for what serves as this nation’s most fundamental laws.  It’s very brief.  The Constitution’s Second Amendment is but one sentence.  It reads:

A well regulated Militia, being necessary to the security of a , the right of the people to keep and bear Arms, shall not be infringed.

It is brief, isn’t it.  It is also somewhat ambiguous.  The clause giving people the right to bear arms is prefaced with the initial phrase “A well regulated Militia”.  It then explains the rationale for such a Militia:  “being necessary to the security of a .”  Finally, the Second Amendment states, “the right of the people to keep and bear Arms, shall not be infringed.”   The point of contention in today’s world is that the sentence, taken as a whole, implies placing a condition on the right for people to bear arms.   In this instance greater brevity would have made the Second Amendment’s statement of rights more clear if it had simply said:

The right of the people to keep and bear Arms shall not be infringed.

If this is what the founding fathers meant why didn’t they make this right more clear, more certain, without adding the preceding condition of a well regulated Militia?  Certainly they meant for citizen’s of frontier to own a musket – for defense, where otherwise there often was none, and to provide their family with meat through hunting in the surrounding forests and glades.  They included an element that creates uncertainty and, I think, deliberately so.

The writers of our Constitution were wise enough to know they could not anticipate circumstances of future generations.  If their document was to remain relevant over the years it had to be capable of interpretation within the context of a society’s problems, challenges and contemporary sensibilities.  This didn’t give lawmakers two hundred years in the future license to refute fundamental Constitutional principles but, where there was room for honest argument as to the meaning of a clause, there was also latitude for interpretation.  The Second Amendment certainly supplies this latitude.

The gun owner of Eighteenth Century America had a smooth bore flintlock weapon that was capable of being fired up to three times in the space of a minute by an experienced shooter.  The nation was largely rural and families were on their own, self reliant for most everything they would need to survive in a potentially hostile environment.  In this environment it was clear to the writers of the Second Amendment that people needed their firearms.  But would this always be the case?  During this period, administered by George Washington, who among the populace could foretell of the Twenty-first Century?  Obviously no one, and the Constitution’s writers were wise enough to know it.  When they felt it necessary they wrote laws in a fashion that would allow the judges of future Supreme Courts to determine a law’s meaning – within the context of a nation’s needs.  The Supreme Court makes our Constitution a living document because its rulings unavoidably reflect contemporary circumstance.  The judges themselves, more often than not, reflect the philosophy of the democratically elected representatives who appoint them and approve their nomination to sit on the Court.  The Constitution’s writers attempted to limit its scope to fundamental principles that would provide the foundation for a healthy government, free people and a vibrant, dynamic society.  The document’s language was vigorously debated.  Compromises were made.  No one claimed its perfection.

We are each daily immersed with news of dispute, turmoil and folly.  In this context it seems the wisdom of the Founding Fathers has been lost somewhere between then and now.  I think not.  Given what they knew of the squabbles of their time I doubt the lawmakers of George Washington’s era would think so, either.

Posted by coldValentine at 6:50 AM