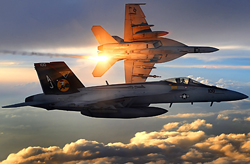 A strike mission may require a plane dedicated to air defense, another suited for defense suppression and a third for precision strike on the target.  Space is a premium on a carrier and the jets launched from its deck must perform multiple roles.  The Navy's F/A-18 is termed a force multiplier because it is designed to perform all the missions the Air Force might assign to distinctly different aircraft.  This challenges not only aviation engineers but the pilots as well, who must train for proficiency in multiple tasks.  This 1680 x 1050 F-18 photo is available at YB88 Wallpaper. 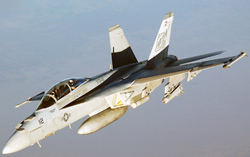 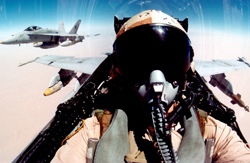 The F/A-18E is the single seat model of the Super Hornet while the 18F has a WSO, Weapons System Officer, aft of the pilot.  Sophisticated avionics and enhanced functionality of combat aircraft can overwhelm one individual with numerous tasks and options to consider.  The pilot used to flying solo may not be comfortable with the crew concept but it does free him to do what he does best - pilot the craft.  This 1600 x 1143 photo at 96 dpi is posted at Reddit. 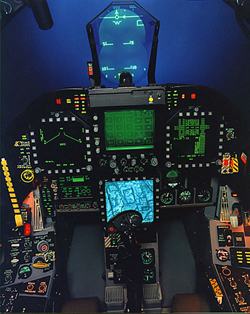 
There's little time to survey your screens but the idea is too much information is better than too little.  It takes a few years flight experience to master this environment and that's only if you already have the talent and aptitude for this work in the first place.  Picking the right people for the job is a big decision.  You're given enormous responsibility and trained at great expense.  The government needs pilots that will stick around for more than just a few years.  After all, the plane is only as good as the one who flies it.  The image is 400 x 502 and is at Reddit. 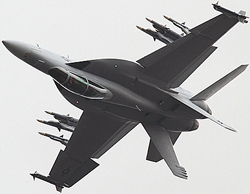 The F/A-18 Hornet was considered a supplement to the F-14 Tomcat for providing fleet protection when it first became operational.  Now the F/A-18 Super Hornet not only supplants the Tomcat it replaces the A-6 Intruder, as well.  No one aircraft or pilot can optimally fill a variety of combat roles but the challenge of Naval aviation does not end with carrier deck landings.  The retirement of several aging aircraft models has recently led to specially fitted F/A-18s to add aerial refueling to their assigned tasks.  The above 709 x 472 photo is from Image Shack.

You'll find a weapon here to meet most any military need.  We have short and long range air interdiction, over the horizon anti-ship missiles, armor penetrating explosives, cluster bombs to handle personnel issues, precision bombs for high value ground targets and bombs that specialize in minimizing collateral damage, as well as assorted devices to neutralize air defenses.  The F/A-18 Super Hornet comes with eleven hardpoints enabling you to mix and match them as you deem appropriate.  The graphic is 610 x 438 and is posted at Reddit. 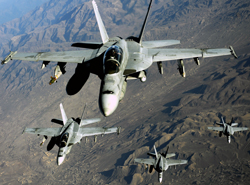 The F/A-18 can provide close air support for troops on the ground but the land is barren of high value targets in countries such as Afghanistan.  In the War on Terror what mission can be assigned these jets that can't be better served by some other approach?  Armed drones can linger inconspicuous for hours over an area.  Soldiers on the ground can put a human face on the American presence.  The F/A-18 would be a plausible measure used to reopen the Strait of Hormuz if it were closed by hostile military action.  Weapons are tools used to influence relations between nations.  They usually best serve their purpose when they can remain holstered.  This is a 3564 x 2472, 300 dpi image from Wikipedia. 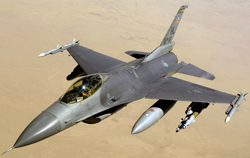 COLD VALENTINE
Posted by coldValentine at 10:10 AM