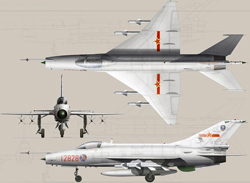 Korea was the first opportunity to test the initial efforts at jet fighter design.  From the experience gained from engagements like those in MiG Alley came the second generation of fighters.  The engineers of Mikoyan-Gurevich would devise a delta wing interceptor that would become an integral part of the air forces of fifty nations, the most produced and widely flown combat aircraft of the jet age.  This graphic of the MiG 21 with armament is 1024 x 768 and available at Molnija. 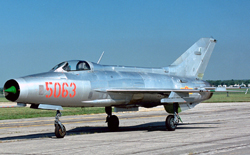 This later version MiG-21 shows improved armament with four infrared short range missiles attached to underwing pylons as well as carrying twin-barrel 23 mm cannon.  The lightweight agile MiG had no equal for in-close combat but its lack of internal fuel capacity gave it extremely limited range.  This MiG shows the enlarged dorsal spine that added to fuel capacity.  The resolution is a bit grainy but you will find this 1024 x 768 image at Flash Screen.

The MiG 21 was faster than the contemporary F-104 Starfighter and held a number of speed records in the 1950s.  Pilots favored the aircraft and nations were attracted to its relatively inexpensive operation and ease of maintenance.  It lacked sophisticated avionics but it was a rugged, reliable, high performance jet developing nations could afford.  You will find this 1074 x 768 rendition of MiG 21s by Gino Marcomini at Oxygino. 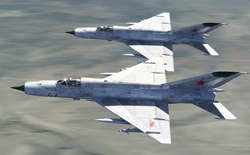 The unique combination of delta wing with conventional horizontal tail aided the aircraft's maneuverability and improved lift, making it possible to use short, front-line airstrips.  Further refinements continued to improve the MiGs lift but enhanced capabilities also added to its weight.  More than 10,000 MiG-15s were eventually produced and the design was continually updated.  This 1024 x 734 illustration is seen at Deviant Art. 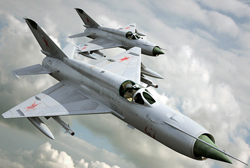 The MiG 21 performed well against the heavier, two engine Phantom over North Vietnam but suffered heavy losses when challenging Israeli aircraft in the Middle East.  Pilot skill and the appropriate tactic make a difference.  North Vietnamese pilots used quick hit and run tactics to good effect against fighter-bombers laden with ordnance.  Judging by the results it's not likely Egyptian and Syrian pilots encountered similar situations.  Gino Marcomini provides the above illustration at his aviation art site.

The limited range, high speed interceptor role of the MiG 21 makes it and its successor, the MiG 23 Flogger, essentially defensive aircraft.  The longer range and ground attack capability of the Su-17, Su-24 and MiG-27 gave Soviet forces a critical offensive punch.  Soviet design philosophy would make the subtle shift over time from air defense to air combat, developing the MiG 29 and Su-27 to answer the American challenge of the F-15.  On every front with every military system each super power spent freely to find a technological edge or to, at least, remain competitive.  The realization would eventually come that military victory was not possible.  Deploying ever more sophisticated missiles, planes and ships, when always matched by the opposing side, did not advance security.  Bulldozers and cranes build infrastructure that contributes to national wealth.  Tanks are simply tanks.  The two nations began negotiating limits to arms research and deployment in hopes of reducing both cost and tension.
This 1252 x 743 MiG 21 Cutaway is at The Bandit Bulletin. 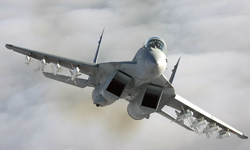