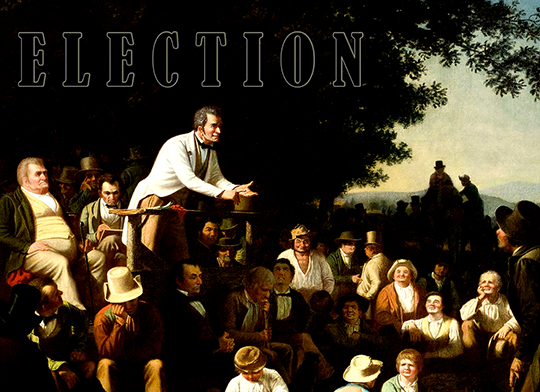 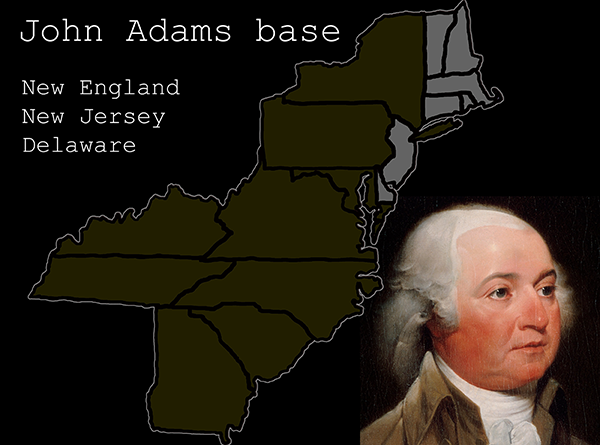 70 votes needed for a majority of the 138 votes available in the Electoral College.

These states delivered all their electoral votes to Adams in 1796 and were expected to do so again in 1800.

To win his bid for reelection Adams needed an additional 9 votes.  His most likely sources would be these battleground states: 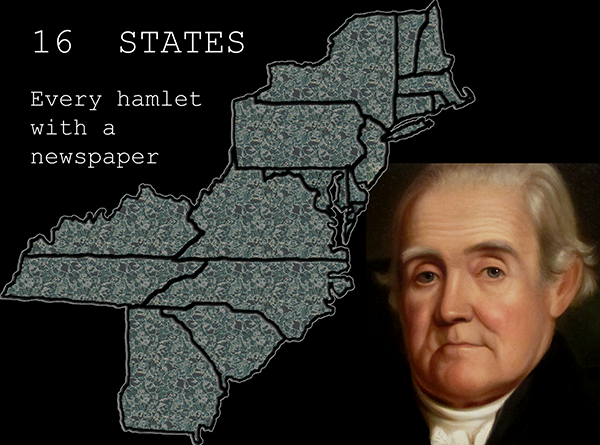 It's safe to assume Noah Webster was a Federalist.  Accomplished people chose the party celebrating rational, measured judgment - businessmen successful in commerce and finance, as well as statesmen chosen from Federalist ranks for great public calling.  Federalists have controlled the presidency, congress and the courts since the nation's inception.  This twelve year winning streak helped replace resolve with complacency, and a presumptive entitlement to power.  The result is an emperor posturing and parading, unaware of his own nakedness. 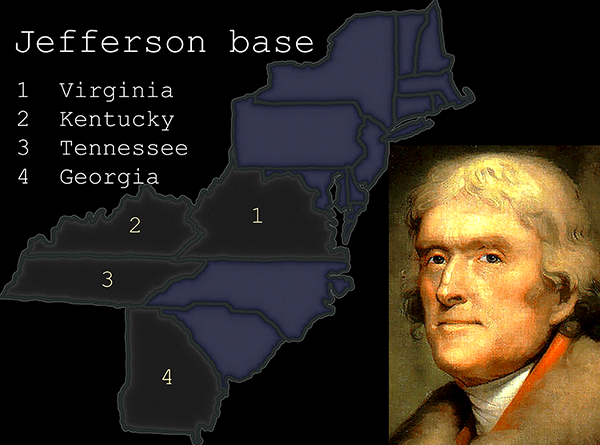 21 electoral votes in Virginia - nearly twice the twelve total New York brings to Adams.  A trio of states combine their puny totals with that of Virginia to give Jefferson a modest start of 32. 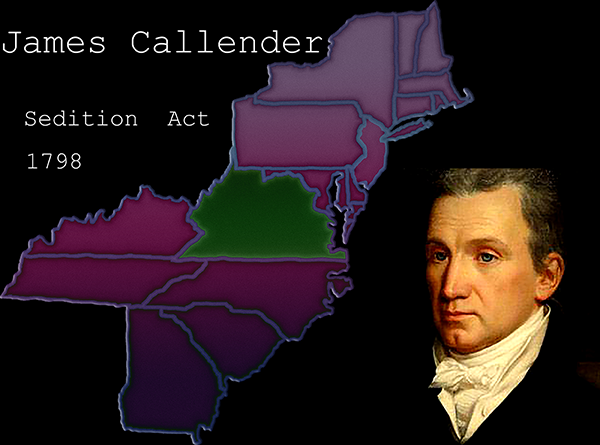 James Callender made a living hitting below the belt.

His services were sought after by republican leaders such as Thomas Jefferson who admired his gift with the poison pen.  Callender exposed Hamilton's ongoing affair with another man's wife.  He revealed the secret dictatorial desires of George Washington and filled readers in on the warmongering policies of President Adams.

Jefferson believed print media was his party's best means of breaking Federalist control of the Federal government.  In five years time Jeffersonian newspapers more than doubled in number to become forty percent of the market by 1800.

James Callender was an early target of the Alien and Sedition Acts enacted by Congress to silence government critics during tensions with France.  Callender would eventually serve nine months in a Richmond, Virginia prison and pay a two hundred dollar fine. 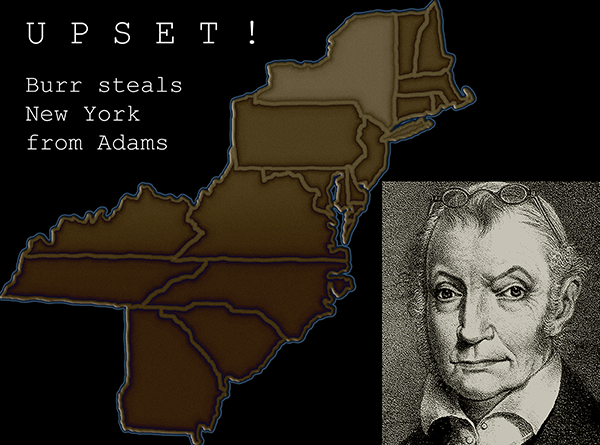 Aaron Burr picked John Adams' pocket of all New York's electoral votes, turning the president into an underdog in his bid for reelection.  Burr raided the presumed Federalist stronghold of Manhattan of its laborers and artisans, people who worked with their hands and resented the presumptive airs of Federalists.  Adams and his backers were stunned to find New York's state legislature swing to the Democratic-Republicans.  Twelve votes critical to the president had switched to Jefferson's camp, just like that. 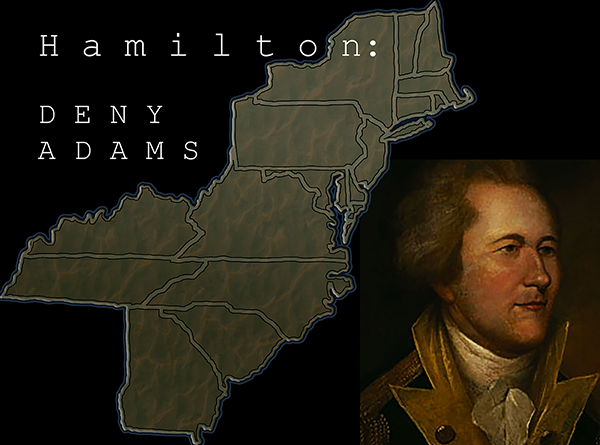 The scorn Alexander Hamilton expressed towards his fellow Federalist John Adams was public, frequent and personal.  Hamilton spent the summer touring New England telling folks their president was unfit.  He worked behind the scene to obstruct Adams' initiatives, including several months delay sending American envoys to Paris to successfully complete an honorable agreement with France.  Word of this accomplishment would not reach the United States until after the election on December 3rd - too late to be of help to Adams. 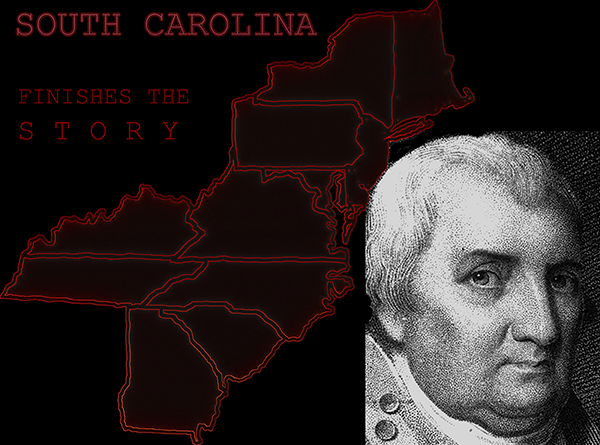 Charles Pinckney was a wildcard in the final hand played to win the presidency in the 1800 election.  It was a scheme promoted by Hamilton to maneuver Pinckney pass Adams for the Electoral College win.  This effort failed once it became clear Pinckney would not cooperate in this treachery.  Thomas Jefferson would be awarded South Carolina's eight votes, giving him an electoral majority of seventy-three, and presumably making Jefferson next president of the United States.  Turns out though, another candidate - Aaron Burr, got seventy-three votes as well.  This wasn't going to be easy. 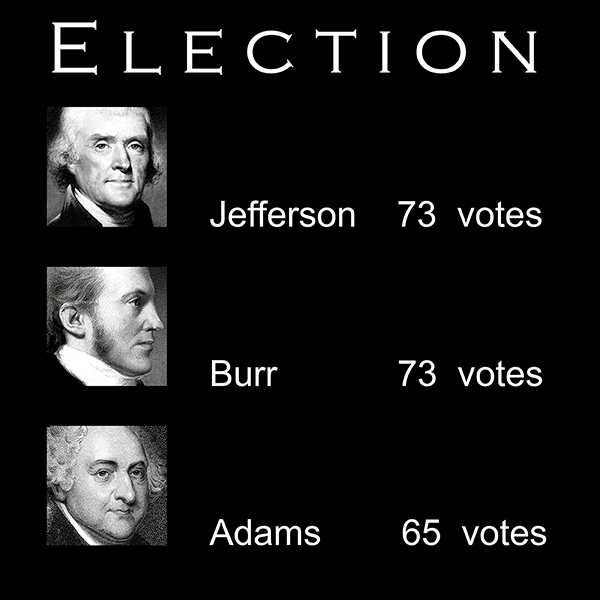 The Democrats' vice-presidential nominee, Aaron Burr, was more than happy to undercut his running mate, Thomas Jefferson, for a chance at the top spot, the presidency, once he got word of the tie.  Which of these two men became president was now a matter for the House of Representatives to decide.  Unfortunately for Jefferson the House was currently controlled by his rivals, the Federalists.  For them it was a case of pick your poison.  At the same time Federalist leaders made clear their decision could be swayed by a deal and they were ready to haggle. 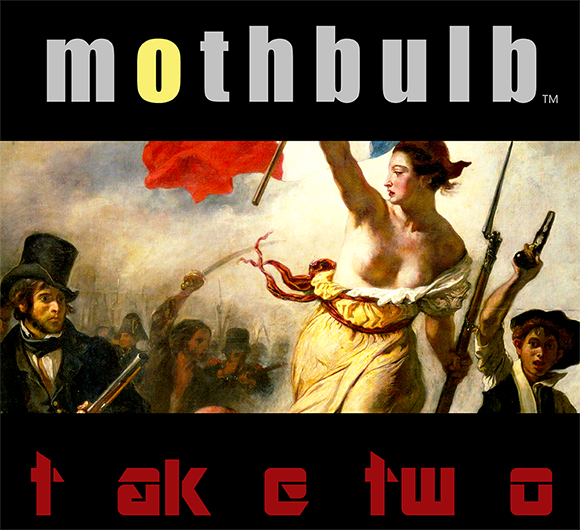 Posted by coldValentine at 12:22 PM