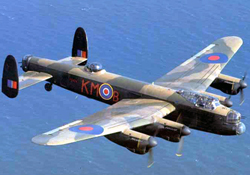 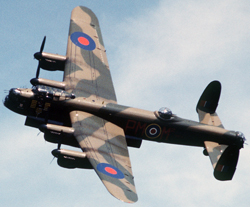 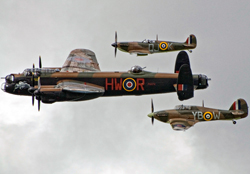 The Avro Lancaster was the best, most effective, British workhorse bomber for the RAF in World War II.  It was developed from a previous, unsuccessful two engine bomber effort, the , which was plagued with unreliable engines, appropriately named Vultures.  The used many of the ’s parts including its extraordinarily sturdy fuselage.  The resulting aircraft had remarkable flying characteristics and was powered by the famous Rolls Royce Merlin XX engine, the same powerplant used by the Spitfire. 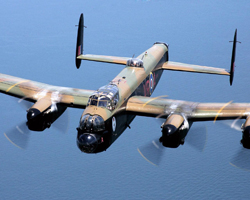 When Sir Arthur Harris became Air Chief Marshal in February, 1942 he prioritized the building of four engine bombers.  The Battle of Britain was over and it was time to take the war to , its industry, its cities, its civilians.  A plague had been launched on Western Civilization and it was time those who spawned it began to share in its tragedy of pain, heartache and sorrow. 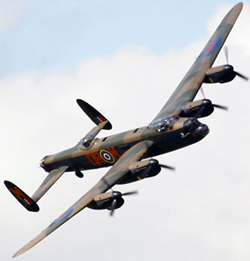 Night bombing was, initially at least, safer than day bombing but inaccurate, and called for saturating an area with a combination of explosives and incendiaries to be truly effective.   Of course, the victims of these raids were not about to give the crews of a free pass.  Bf 110s and Ju 88s were developed as night fighters, rising up beneath the unprotected belly of the and knocking it out of the sky with their upward firing guns. 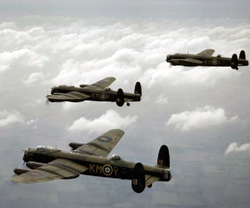 More than 7300 were built by the end of the war but, of these, 3345 left on missions and never returned.  The casualty rate was high but apparently acceptable when two nations are grappling to survive a winner take all war.  People keeping track of bombing statistics determined that a Lancaster was able, on average, to deliver 132 tons of explosives before being lost while a Halifax delivered 56 tons and a Stirling only 41 tons.  With a normal bomb load being about 7 tons it was always a good idea to write home, expressing your love, prior to your next mission. 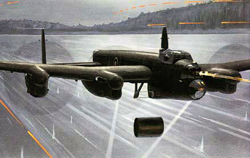 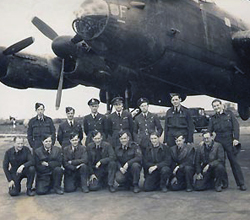 The ’s cavernous bomb bay made it ideally suited for specialized tasks requiring enormous explosive force.  The German battleship Tirpitz capsized and sank from multiple strikes of 12,000 pound Tallboy bombs delivered by the .  The 22,000 pound Grand Slam was used to crumble otherwise invincible submarine bunkers near the end of the war.  Not even the B-29 Super Fortress was capable of carrying ordnance of this size. 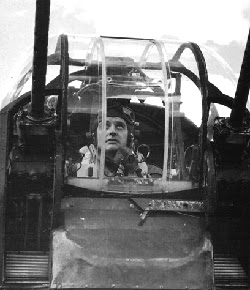 The submission of your mortal enemy after years of warfare will certainly give one a feeling of relief if not a desire for delirious celebration.  Still, it’s been a disaster for most everyone involved.  The accomplishments of civilization lie in ruin, with families and lives destroyed.  It will take many years to rebuild to the point society was prior to war and much of civilization’s triumph of culture has been gutted and will never be recovered.  No sooner had we begun scrapping the tools of warfare designed to win World War II than we found ourselves needing to forge new implements of destruction to face a new threat and prepare ourselves for a potentially even more disastrous conflict.  New technology made the world too small for nations with competing needs and ideologies to behave neighborly.  Fortunately for the human species the leaders of the Cold War demonstrated just enough restraint to prevent a global cataclysm. 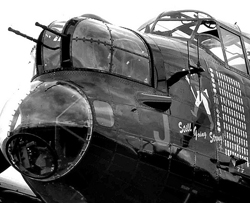 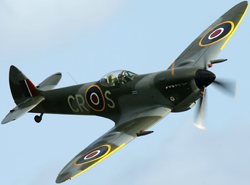