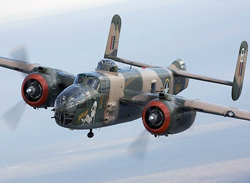 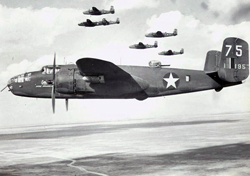 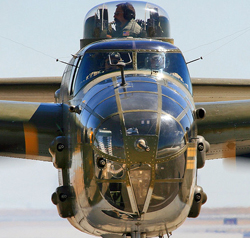 For a company having little experience in aircraft design North American Aviation came up with two remarkable World War II planes destined for the history books.  The P-51 Mustang ranks among the short list of legendary fighters that includes the Supermarine Spitfire and the Focke-Wulf Fw 190.  The B-25 Mitchell may stand alone as the best medium range twin engine bomber of the war. 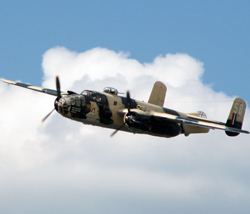 Named after famed air power pioneer Brig. Gen. William S. ‘Billy’ Mitchell, the B-25 lived up to its namesake seeing action in virtually every theatre of the war.  Developed prior to World War II the Mitchell was already noteworthy for its tricycle landing gear at a time when planes routinely rested on their wheeled tail. 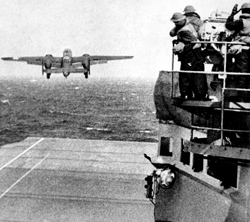 The B-25 will always best be known for the Doolittle Raid on .  Four months after Pearl Harbor Lt. Col. James Doolittle led a formation of 16 B-25Bs from the pitching deck of the USS Hornet.  Each bomber had been stripped of its defensive armament and was fitted with extra fuel and 2,000 pounds, 907 kg, of bombs in an audacious, low level raid on selected targets in , , and .  The resulting damage was minimal and the strike did not make the Japanese news but the government of Prime Minister Hideki Tojo took notice.  They had become complacent following a string of easy victories over the Western powers in the Pacific.  The raid served notice of potential consequences down the road. 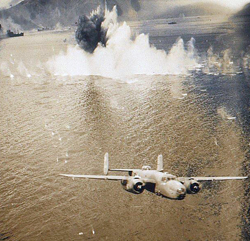 An effective but highly dangerous tactic developed by B-25 pilots in the Pacific became known as skip bombing.  It involved approaching an enemy ship at low altitude, braving intense defensive fire, and releasing conventional bombs in a manner that prompted them to bounce across the top of the water, slamming into the side of the ship, much like a torpedo.  The maneuver called for additional offensive power up front in the form of .50 caliber (12.7 mm) machine guns to disrupt the ship’s defensive fire. 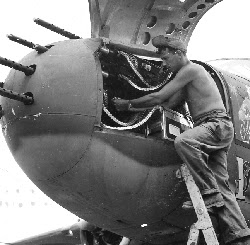 The definitive Mitchell was the B-25J which came as either a glass or solid nose.  More machine guns were added for additional firepower, both in the solid nose and as blister packs along the side.  In the ground attack role the B-25 sometimes utilized parafrag bombs, 23 pound fragmentation bombs having proximity fuses and attached to a parachute.  An attack of this nature produced casualties far exceeding that of a strafing run. 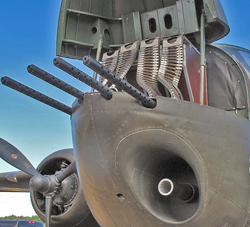 An idea that proved more rewarding on the drawing board than in its actual use was placing a 75 mm cannon in the nose of the B-25, much like the armament used by the Sherman tank.  It was thought to be a good anti-shipping weapon but a number of units took it upon themselves to replace the gun with more conventional machine guns. 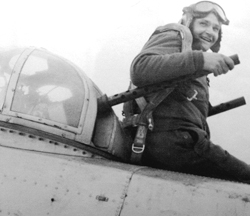 Joseph Heller, bombardier on a B-25 in the Italian campaign, wrote a fictionalized version of his experience in the book Catch 22.  You can get out of combat by declaring yourself crazy.  There’s nothing crazy about wanting out of combat so your request is denied.  Only crazy people want to be in combat but they won’t be removed because they haven’t submitted a request.  That is basically Catch 22.  It’s just makes good military sense. 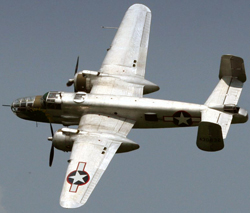 Close to 8000 B-25s were eventually manufactured with several hundred finding their way under Lend Lease to both and the .  The US Marines would find extensive use for them in their island hopping campaign in the Pacific and they would begin their appearance in and the Mediterranean Theater at in October, 1942.  They were reliable, repairable in less than optimal conditions and versatile.  If they didn’t come out of the factory the way you wanted it, chances are it could be tweaked to meet your needs. 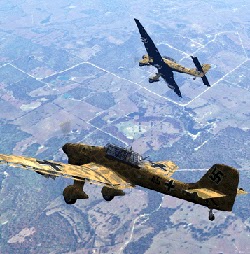 COLD VALENTINE
Posted by coldValentine at 6:17 AM

Email ThisBlogThis!Share to TwitterShare to FacebookShare to Pinterest
Labels: B-25, B-25 Mitchell