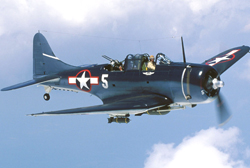 The SBD Dauntless will be remembered in history as the plane that sank four Japanese carriers at the Battle of Midway in June, 1942.  The formations of SBD-3s were at the limit of their range with no fuel available for further search when they happened upon the Japanese carriers in their most vulnerable condition, with newly fueled planes readying for take off.  The dive bombers dropped through the clouds and, in the space of five minutes, destroyed three fleet carriers with a fourth, the Hiryu, to be destroyed hours later.  Six months following Pearl Harbor the defeat at Midway placed Japan on the defensive for the remainder of the war.
Picture:  3000 x 1575 - Dixie Wing 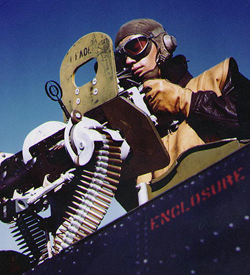 The SBD Dauntless had the lowest loss ratio of any American aircraft in the Pacific owing to its rugged construction.  Twin 7.62 mm machine guns for the rear gunner was not a strong deterrence to attack.
Picture:  490 x 765 at 96 dpi - Wikipedia 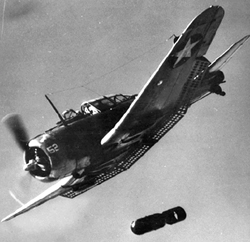 The pilot approaches his target at 15,000 to 20,000 feet (4570 - 6095 meters) and waits until he is nearly directly overhead before pulling up the nose, deploying the dive flaps and then rolling into an over 70 degree plummet.  With his aircraft lined up directly with his target he releases his ordnance singly or in a salvo by pressing the red bomb release button on top the stick control.
Picture:  480 x 427 - Teoma 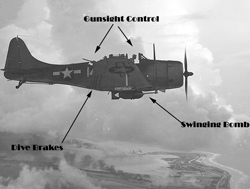 Early problems with the Dauntless included fogging of the telescopic target sight as the aircraft dropped in altitude and the centerline cradle would sometimes sling its bomb harmlessly into the sea instead of toward the target.  Controlling the aircraft required effort and tended to wear one out on long flights.
Picture:  864 x 637 - Jitter Buzz 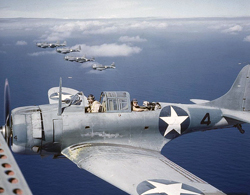 Well before the Second World War the U.S. Navy was focused on developing a carrier-based dive bomber as the only effective way of bombing a maneuvering vessel from the air.  The Navy ordered the initial version of the SBD in early 1939.  The dramatic performance of the German Ju 87 Stuka dive bomber over France in 1940 led the Navy to order an additional 174 SBD-3s for the fleet.
Picture:  640 x 491 at 300 dpi - Static Flicker 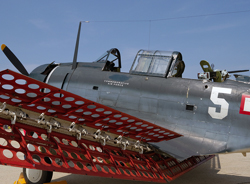 The SBD Dauntless proved itself in the Pacific by sinking more Japanese tonnage at sea than any other aircraft as well as contributing to Japanese carrier losses in the battles of Coral Sea and Midway.  It could be an exhausting beast to fly but it was reliable and it gave you the best chance available of a safe return to base.
Picture:  1200 x 812 at 240 dpi - Airliners 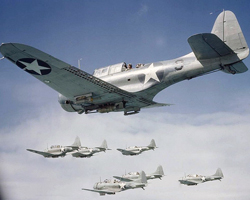 Late in the war the Dauntless would be replaced with the more advanced but troublesome Curtiss SB2C Helldiver.    The final Dauntless version was the SBD-6, equipped with a 1350 horse power radial engine.  It was nearing the end of its run and only 450 were built.  By now the SBDs were being relegated to secondary assignments such as anti-submarine patrol and close air support missions for the Marines.
Picture:  640 x 484 at 300 dpi - Static Flicker 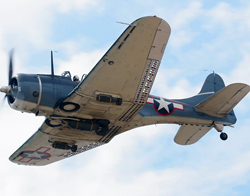 Foresight made the difference

The war against Japan turned on the fact that this plane was in place and positioned to make a difference when the critical moment arrived.  In June of 1942 our carrier fighters were obsolete, our torpedo planes useless and the torpedoes themselves unreliable.  Only the SBD-3 Dauntless was a truly effective component of carrier aviation.  With two strikes against U.S. forces in the Pacific it hit the needed home run, blunting an assault that could have forced an American retreat to the shores of California.
Picture:  600 x 432 - Aviation History 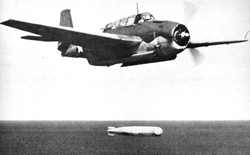