As the famous Afrika Korps backtracked across during January, 1943, its commander, General Erwin Rommel, was persona non grata with those that mattered most, Hitler and Benito Mussolini.  Rommel had become increasingly disillusioned by the lack of support given his North African troops.  Hitler was absorbed with the deteriorating situation on the Eastern Front in .  His once powerful Sixth Army was days away from being completely eliminated at while his remaining troops and armor in southern were in a desperate fighting retreat trying to stay clear of the closing Russian noose.  For Hitler everything depended upon staunching the German bleeding on convulsive Russian steppes.  What could Rommel possibly expect?  Hitler had no real ambition in .  His valuable panzer armor was stuck in this bleak desert owing to the inept military performance of his Italian ally.  Rommel’s charge was to hold off British advances.  There never really were the resources available for Rommel to gain a decisive German victory.  Yet despite being outmanned and outgunned Rommel fought only to win.  He was too brilliant a battlefield tactician to ever play for the draw.
Picture:  1480 x 1035 at 96 dpi - Reddit 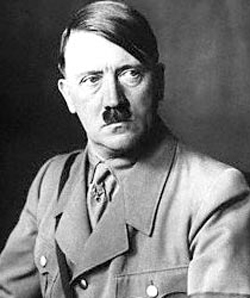 Even as Rommel stayed one step ahead of General Bernard Montgomery’s pursuing Eighth Army a new threat was now looming to his west.  A large combined British and American force had landed on the North African shores near his source of supply in .  Rommel now faces almost certain failure for the German military adventure in North Africa, even with the recent arrival of the Fifth Panzer Army in .  How ironic it was.  The reinforcements Rommel had long clamored for arriving now - too late to clench victory, too late to defy collapse.  Hitler hears his once favorite General calling on the proud Wehrmacht to abandon its equipment and board the men on anything that flies or floats, returning them to .  For both Hitler and Mussolini this is worse than heresy.  This is defeatism.  Dictators are not immune to the political heat that comes with the momentum of defeat.  Once loyal allies begin to waver, looking for an exit.  One’s own population becomes demoralized, sullen.  You are no longer viewed with the confidence given the captain of a winning team.  You begin to sense treachery in the acts of those about you, those you need to trust.  Rommel thought he could reason with men who clung to their needed delusions.  His call for desperate measures placed new weight on Hitler's already buckling view of empire.
Picture:  300 x 250 - Famous People 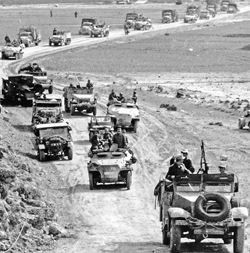 Faced with diminished confidence in his leadership Rommel was no longer master of all that was German in .  He now shared authority equally with the commander of the Fifth Panzer Army, General Jurgin von Arnim.  His plans required authorization from the Italian Comando Supremo in .  He found himself battling a divided command and impatiently awaiting approval of plans in a time requiring quick and decisive action.  These were the dynamics within the Axis leadership that would be responsible for the incomplete victory of the Afrika Korps in the upcoming at   Opportunities to turn battlefield wins into crushing victories would be missed because of competing lines of authority and bureaucratic delay.  Bold strategic thrusts that would unravel the Allied command in would be hedged and muddled by uncomprehending officials hundreds of miles and a world apart from the ever changing battlefield action.  No one more than Rommel could better appreciate the hollow nature of this win when compared with what truly might have been.
Picture:  800 x 606 - Tank Front

Posted by coldValentine at 10:14 PM