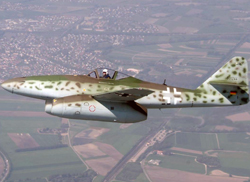 The technology was showing promise in 1939 but why make it a priority when you're already winning everything in sight.  Men like Ernst Heinkel and Willy Messerschmitt continue to tinker with planes powered by turbojets but are largely ignored by political leadership until it is too late.
Picture:  2622 x 1852 at 225 dpi - FUS 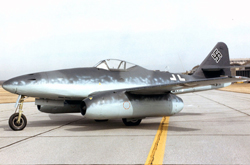 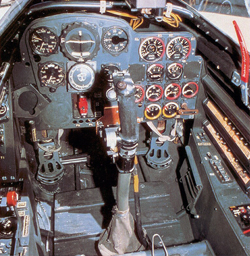 It was a revolutionary technology being quickly introduced to pilots during the closing desperate months of the Third Reich.  Many pilots were killed from engine failure and other accidents having to do with unreliability and inexperience.
Picture:  510 x 650 - As Is Biz 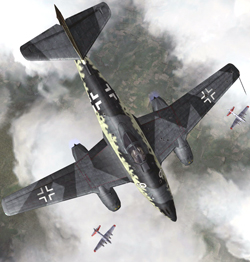 25 July, 1944 - A British Mosquito on a photo-reconnaissance mission over Munich is quickly overtaken by an unbelievably fast object whose heavy cannon fire sends it spiraling to earth.  This begins the mercifully short combat career of the Me 262 Schwalbe or Swallow.
Picture:  1600 x 1200 - As Is Biz 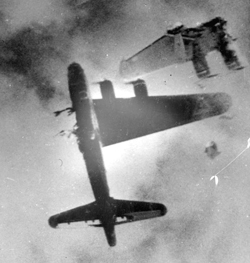 Four closely grouped 30 mm cannon could shred its target in a short burst.  Rocket fire was another option.  There were only small numbers of Me 262s terrorizing the sky but their presence had enormous psychological impact.
Picture:  1800 x 1189 at 300 dpi - Wikipedia 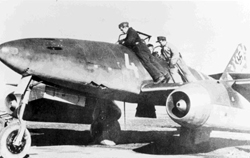 It was difficult producing an engine that was both powerful and reliable.  As it was the Schwalbe required two turbojets and they were used up after just twenty hours flight time.  Among the first pilots chosen for the project were those experienced with handling multiple engined aircraft.  Losing an engine quickly becomes fatal if you hesitate from uncertainty in what to do.
Picture:  627 x 382 - The Future of Things 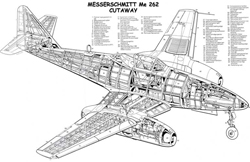 The first Me 262 was powered with BMW engines that both flamed out on take off.  Fortunately for the pilot there was a propeller engine in the plane's nose.  The BMWs were replaced with Junkers' Jumo turbojets.   It would be more than a year, the end of May, 1943, before Messerschmitt receives a production order of 100 planes.
Picture:  800 x 519 - Fiddlers Green

Can it carry bombs?

A demonstration of his new interceptor was provided for Hitler in November, 1943.  He wanted it for bombing.  Production was set back a bit while Messerschmitt worked the design into a fighter-bomber capacity.  It never proved satisfactory and the idea was abandoned after three months.
Picture:  714 x 300 at 600 dpi - Stof's Virtual Flying Messerschmidt provided the Luftwaffe with more than 1,400 Me 262s of which less than 300 ever saw combat.  Hundreds were destroyed by the Allies while parked on the ground.  Many were grounded for lack of fuel, lack of spare parts, lack of trained pilots.  It was difficult finding the alloys necessary for making the plane.  Skilled engine and airframe specialists were also hard to come by.    The initial production line was destroyed by Allied bombing in August, 1943.  It was too late for miracle weapons to turn the tide of war.  By the time Nazi leaders called the fire department the house was already half consumed in flames.
Picture:  800 x 437 - Roll Models 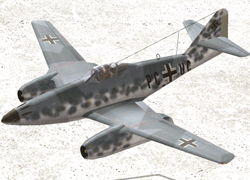 The British had a jet.  The Americans were working on one as were the Russians.  But it took exposure to German technology once the war ended to bring these nations truly into the jet age.  Fortunately for the world Nazi leaders lacked not only wisdom but foresight and imagination.  Their fascination was held by sixty ton tanks and more efficient ovens while their scientists dabbled with the technology of the next generation.
Picture:  800 x 527 - Mission 4 Today 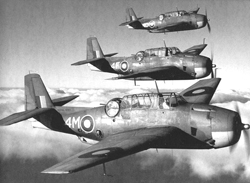 COLD VALENTINE
Posted by coldValentine at 5:49 AM

Email ThisBlogThis!Share to TwitterShare to FacebookShare to Pinterest
Labels: Me 262, Me 262 Schwalbe, Me 262 Sturmvogel