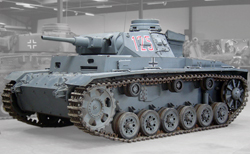 The Pz III was designed in the 1930s when Germany was still concealing the extent of its rearmament.  It's development name, Zugfuhrerwagen - platoon commander's car, didn't describe the medium tank that it was.  It was designed to have the 50 mm high velocity cannon prescribed by General Heinz Guderian but it was instead fitted with an inadequate 37 mm gun due to problems with ammunition supply.  The history of the Panzer III is one of repeated modifications to a tank that was often one step behind the realities of the battlefield.
Picture:  800 x 468 - Wikipedia 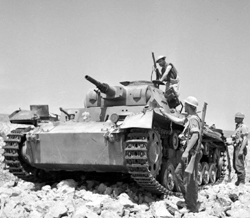 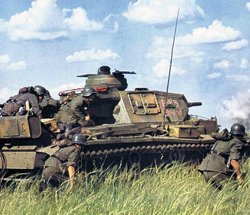 The Panzer III responded to growing Allied firepower with bolting on additional armored plates, then widening the track to handle the extra weight.  The added armor would damage the tank's performance while remaining vulnerable to Allied guns.
Picture:  478 x 400 at 96 dpi - WWII in Color 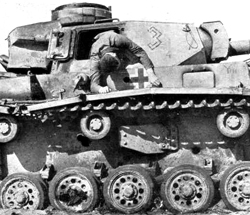 
In 1935 when reality was still only plans on paper the Wehrmacht decided to build two types of tanks.  The first, the Panzer III, would have a high-velocity gun used to defeat other tanks.  The second, the Panzer IV, would use a high caliber gun to fire HE - high explosive - rounds to destroy infantry and artillery.  A tank battalion would have three companies of Panzer IIIs and one company of Panzer IVs as support.  The Pz III didn't get the gun needed to fulfill its role and a good deal of time and effort went into trying to make it the tank it never quite came to be.
Picture:  749 x 489 at 600 dpi - History of War 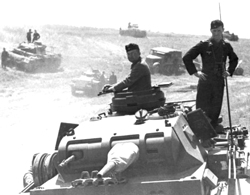 On endless days living your dream of mobile warfare far from home you might appreciate the slight incline of the driver's seat giving you better vision and control as well as the relatively spacious accommodations enjoyed by you and your four fellow crew members.  The three man turret frees up the commander to think quickly on his feet when confronted with one of those potentially game ending, lights out situations.  You especially enjoy thoughtful touches such as the intercom system that allows you to hear frantic orders barked into your ear over the deafening sound of cannon fire and the roar of an overheated engine at your back.
Picture:  800 x 539 at 50 dpi - World War II Database 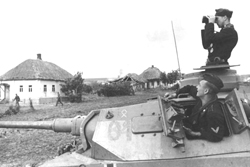 Later in the war Pz IIIs found themselves providing escort for Tiger tanks - sixty tons of armor and belching fire, but mostly blind to the threat of infantry scampering about with magnetic charges and other assorted unpleasant surprises.  Nothing was without vulnerabilities and it was the enemy's business to quickly find out how to turn your protective shell into a blast oven.
Picture:  656 x 400 at 50 dpi - Axis History 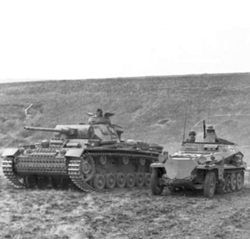 Make it simpler.  It's grimy heat or frozen mud or just the constant jerk rattle of no roads travel.  Things break down.  They blow up and need replacing.  The Panzer III had a fine transmission that made it less tiresome for the driver.  It was too complicated, too difficult to fix.  Replace it with something sturdier, cruder.  It started with being all about the engineering but, of necessity, it became all about numbers.  We can't begin to fill the need.  They have to be easier to make.  If something isn't necessary then get rid of it.  Basically it's a tractor carrying a steel box with a gun sticking from it.  Make them as fast as you can because they don't last long in war.
Picture:  800 x 528 at 50 dpi - World War II Database 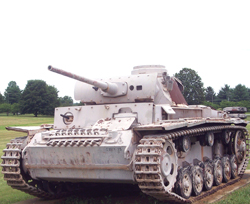 Clausewitz wrote about war being an extension of politics.  In that light this tank is not just a practical application of force and force deterrence but also an embodiment of a particular philosophy and view of the world.  The men that lived crowded within it may or may not have shared that view.  They undoubtedly carried with them photos of loved ones back home and dared to hope that one day they would return alive and in one piece.  Those dreams weren't political, just human nature.
Picture:  2856 x 2142 at 230 dpi - Wikipedia 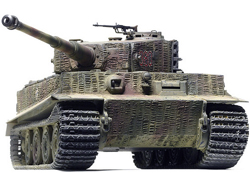