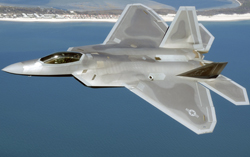 The most advanced fighter that exists is the stealth designed F-22.  The cost of $150 million per unit helped to halt production in 2011 at 187 aircraft.  While fifth generation fighters are being developed by both Russia and China their aircraft are not seen as a near-term threat.
Picture:  3000 x 2400 at 300 dpi - Tyndall AFB 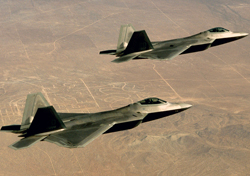 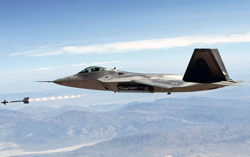 
Four weapons bays house ordnance to maintain the aircraft's stealth characteristics although four hardpoints beneath the wings allow for external weapons.  Advanced avionics enable a lone pilot to perform a mission normally requiring a two man crew.  The end of the Cold War reduced the Raptor's need and its initial order of 339 aircraft was cut nearly in half.
Picture:  1024 x 734 - Military Today 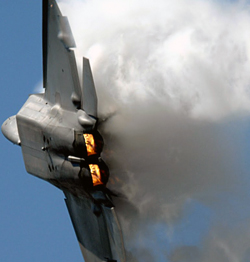 The design is optimized for maneuverability in low speed combat with vectoring engine exhausts.  The engines also provide supersonic cruise capability without the use of fuel guzzling afterburners.  They are also designed for relative ease of maintenance.
Picture:  1600 x 900 - Reddit 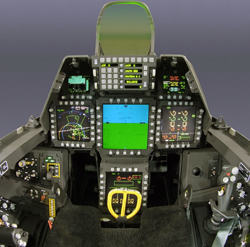 The Raptor cockpit includes a holographic Head-Up Display - HUD, as well as providing for HOTAS controls - Hands on Throttle and Stick, enabling the pilot to issue commands without releasing flight controls.  The F-22's radar system provides the pilot information on approaching aircraft well before the opposing pilot is aware of any threat.
Picture:  750 x 715 - Photobucket 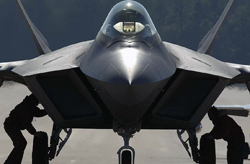 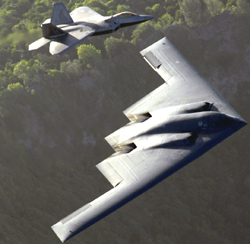 Both the F-22 and the B-2 represent a revolution in aircraft design made possible by advances in computer technology.  Their enormous expense and limited role given the current world situation makes their future uncertain.  Aircraft such as the F-35 are more likely to be called upon to fulfill the role of tactical fighter.
Picture:  3000 x 1860 - Military Desktop 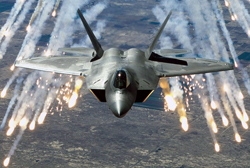 Although the F-22 is capable of providing ground support it is not likely the Air Force would volunteer a $150 million aircraft for such a high risk mission.  Close Air Support is becoming the exclusive role of helicopters like the AH-64 Apache which has the advantage of being able to linger near ground targets.
Picture:  1024 x 804 - Military Today 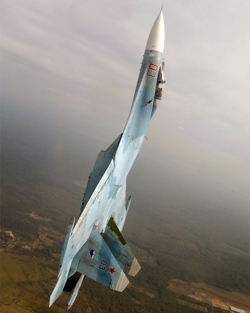