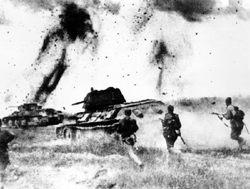 The German Army following its defeat at Stalingrad was weakened but it remained a threat heading into the summer of 1943.  A number of Hitler's military advisers wanted to withdraw their forces to a more defensible position and focus on rebuilding their strategic reserves.  Hitler realized the precarious disposition of his army but he saw an opportunity for an offensive action near a town named Kursk that might well remedy a number of his problems.
Picture:  561 x 424 - Photobucket 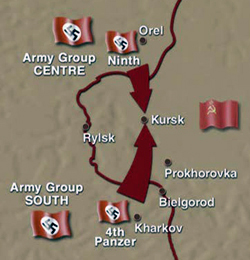 Fighting in recent months had created a protrusion in the German line containing three Soviet armies.  Hitler felt a pincer movement towards Kursk could trap and destroy these troops.  A victory here would weaken the Red Army while straightening Germany's line, requiring less manpower for defense.  Hitler had political reasons for choosing this military gamble, as well.  Germany's allies were unnerved by the defeat at Stalingrad and the destruction of the Sixth Army.  The German people were demoralized by heavy casualties and setbacks in both Russia and North Africa.  Hitler needed a win and he felt he couldn't afford to play it safe.  Time was not on Germany's side.
Map:  592 x 448 - LuRu's Blogs 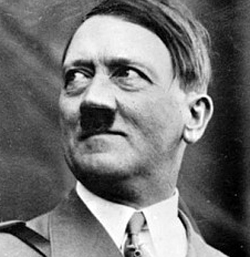 Hitler expected a quick victory over Russia when he launched Operation Barbarossa in June, 1940.  Instead, the Eastern Front had become a grinding war of attrition with a Soviet enemy whose economic resources and manpower reserves were vastly superior.  Germany needed a crushing victory to buy time, to catch its breath, and to prepare for the mounting threat from both Britain and the United States.  Hitler believed German technology would be the key to victory and he postponed Operation Citadel, the attack on the Kursk Salient, more than once to insure new German tanks, the Tiger and Panther, would be available for the battle.
Picture:  460 x 287 - The Telegraph 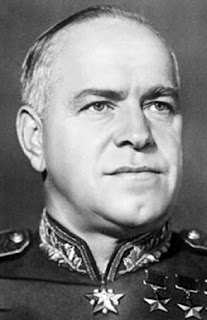 Red Army Commander Marshal Georgy Zhukov was aware of German intentions both because the Kursk Salient was the obvious target of opportunity and Russian partisans behind enemy lines kept him informed as to German activity.  He devised a plan with Stalin's approval that would heavily fortify the salient with trenches, mines, artillery, tanks and over a million armed men.  They would absorb the German thrust and wear their attacks down with sheer numbers.  Once the German armored blow was exhausted fresh Russian troops held in reserve would counterattack and sweep the Nazi war machine from the field of battle.
Picture:  750 x 695 - Our Common Victory 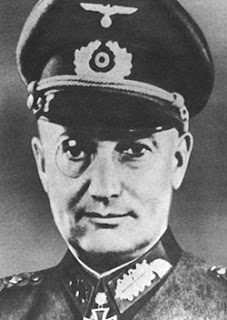 Kursk is 500 miles, 800 kilometers, from Moscow.  The salient occupied by the Soviet army was 120 miles wide and extended 75 miles into the German held area.  Operation Citadel called for General Model to strike south towards Kursk with his Ninth Army which consisted of 6 armored divisions and 14 infantry divisions.  Simultaneously, General Hoth's Fourth Panzer Army would thrust north with his 11 armored and 10 infantry divisions.  The two armies would meet at the center, Kursk, then move east to establish a new line of defense along the River Don.  Germany had massed 900,000 men, 2,700 tanks and 1,800 aircraft for the effort.  It represented seventy percent of all the tanks on the Eastern Front and a majority of the aircraft.
Picture:  260 x 384 at 100 dpi - Wikipedia 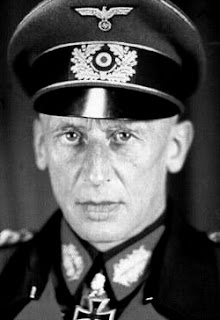 The German armored assault began in the early morning hours of July 5.  Leading the attacking spear were the new Tiger 1 heavy tanks.  Protecting the flanks were new Panther medium tanks and the veteran Mark IV tanks.  These were followed by motorized infantry.  They were met with heavy artillery barrages and highly coordinated teams of antitank weapons.  Model's southern thrust soon stalled while Hoth's Ninth Panzer made some headway, penetrating the first of three Soviet lines of defense.    Harsh battlefield conditions caused many Panthers and the new German assault gun, the Elefant, to break down with mechanical problems.
Picture:  351 x 506 - Wikipedia 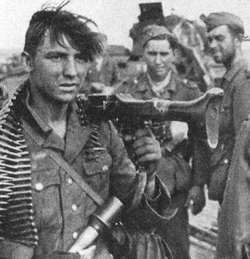 The carnage that resulted from this clash of two military titans climaxed on July 12 near a village called Prokhorovka.  It was here on a battlefield choked in clouds of dust and smoke that 600 panzers dueled 800 Soviet tanks for eight hours.  The engagement was fought to a draw but it was a strategic disaster for Germany.  While its armored might was spent the Soviets had great reserves of tanks and men ready to throw into the battle.  The German military had no choice but to withdraw or face total annihilation.  The following day Hitler cancelled Citadel.  He had new worries in the west.  On July 10 British and American forces invaded Sicily, bringing the war to Italy's shores.  Hitler had no choice but to extract German forces from Russia to aid his teetering Axis ally.  From this point on it would be a long retreat for the German military as Russian armies pursued them relentlessly all the way to Berlin, the lair of the Nazi beast.

Posted by coldValentine at 5:00 PM