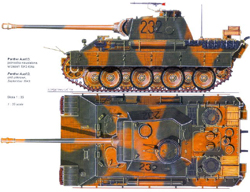 The Panther would arguably become the best tank of World War II despite the fact that it was designed in a rush to counter the Russian T-34.  It incorporated the T-34's sloped armor and emphasis on speed and maneuverability and featured a new high velocity gun that could knock out any opposing tank at a thousand meters.
Picture:  700 x 505 - Photobucket

The Panther with its high velocity 75 mm gun could destroy any tank fielded by the Allies making it the dominant tank of the battlefield.  The U.S. Army believed it would take five Shermans to knock out a single Panther.  It was a tank that was never over matched, just overwhelmed.
Picture:  534 x 800 at 50 dpi - Wikipedia

Three of the members of the Panther's five man crew were in the turret - the commander, gunner and loader.  It was cramped.  The tank also stored up to 79 rounds for its main gun.  The mantlet, the heavy metal piece through which the barrel protrudes, would eventually be redesigned because it deflected shot through the roof of the hull.  The turret armor was 100 mm thick.  It's traversing gear was weak and the turret would not rotate if the tank was on a slope.
Picture:  800 x 578 at 50 dpi - Wikipedia

It had the best ride of any German tank but its complexities made it difficult to maintain in the field and repair.  Its gas fueled powerplant was good for only a thousand kilometers or six hundred miles.  Of course, in a battle situation that may be more than the life of the tank.
Picture:  800 x 546 at 50 dpi - Wikipedia

The Panther's weight of nearly fifty tons came in much higher than initially expected.  When it was rushed into battle at Kursk in July, 1943 most of the Panthers broke down in their journey from the railhead.  The primary problem was gear boxes and running gears over-stressed from the weight.  The cooling system was also inadequate and engines failed and sometimes caught fire.  General Guderian warned the tanks weren't ready but Hitler ordered them into battle as he had already postponed Operation Citadel, the offensive action at Kursk, to ensure the Panthers would be part of the German thrust.
Picture:  510 x 797 at 50 dpi - Wikipedia

Battle of the Bulge wreckage

Allied air supremacy was a substantial threat to German armor.  It's why Germany's assault through the Ardennes Forest in December, 1944 was timed for inclimate weather that ruled out attacks from the air.  The equalizer to German Panther and Tiger tanks came from aircraft such as the P-47 Thunderbolt and the Russian IL-2 Shturmovik.
Picture:  800 x 400 at 300 dpi - Wikipedia 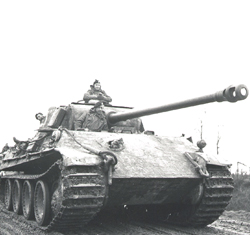 Hitler wanted 600 Panthers produced each month but that wasn't possible.  Several thousand were manufactured between 1943 and the end of the war, in part, because the tank was simplified to ease production.  At this point Germany needed numbers, not refinement.  Germany became desperate for oil, as well.  You can produce an extraordinary tank but if the fuel gauge reads empty your weapon on treads is nothing more than a ready-made museum piece.
Picture:  596 x 620 at 300 dpi -  Wikia 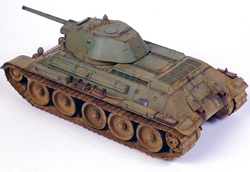