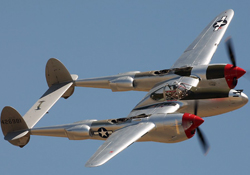 Pilots found the P-38 easy to fly because its center of gravity was below its center of lift which made it extremely stable.  It was actually too stable to be a good fighter and it was easily out-maneuvered by its German counterparts, the Me-109 and the FW-190.  It was replaced as an escort fighter in the European Theater by the P-47 Thunderbolt and the P-51 Mustang.
Picture:  980 x 705 - Richard Seaman 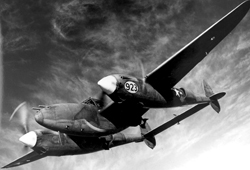 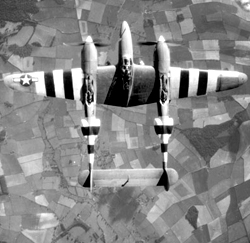 The P-38 did well in the Pacific as a fighter but in Europe it was used primarily for ground attack, strafing targets of opportunity and performing the role of a tactical bomber.  Its great speed also made it invaluable as a reconnaissance aircraft.  Of the 10,000 P-38s produced 1,400 were modified to perform photo reconnaissance.
Picture:  533 x 700 - Wikipedia 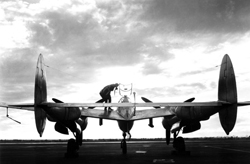 The only way Lockheed could meet Army Air Force specifications for a fighter in 1937 was to give its aircraft two engines.  Without turbochargers the Allison engines provided only mediocre performance above 15,000 feet.  Since the U.S. forbid exporting turbochargers to Europe the British were forced to cancel their order of more than 500 Lightenings.  The Allison engines also proved unreliable in the cold, wet European climate and many aircraft were lost to mechanical failure.
Picture:  780 x 599 at 300 dpi - Wikipedia 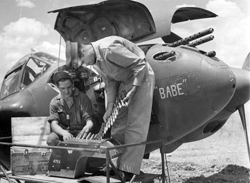 Ammunition rounds need to be inspected to insure they are properly seated in their linkage to prevent jamming.  This pilot is personally verifying the belts are in good order.  You improve your chances of returning to base by taking nothing for granted prior to flying into harm's way.
Picture:  860 x 653 - Wikipedia 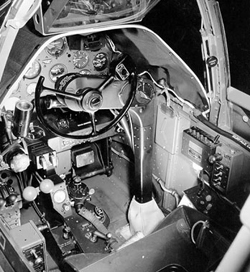 The P-38 cockpit is unusual in having a yoke instead of a control stick to maneuver the aircraft.  Its lack of leverage hampered roll rate and put the Lightening at a distinct disadvantage in a dogfight.  The cockpit was also extremely cold flying at altitude over Europe.  Because the engines are mounted on the wings pilots did not benefit from engine manifold heat to warm them.  They were often numbed by cold as temperatures routinely dropped to well below zero at high altitude.
Picture:  348 x 450 at 75 dpi - Wikipedia 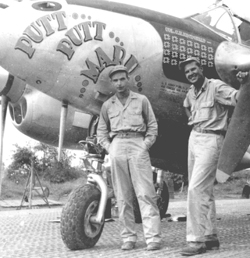 P-38s with drop tanks were used to ambush and destroy the plane carrying Admiral Isoroku Yamamoto, mastermind of the attack on Pearl Harbor.  Tipped off by a decoded message intercept a squadron of Lightenings flew from their base on Guadalcanal to bring down the Admiral's plane over the jungles of Bougainville Island.
Picture:  1010 x 749 - Wikipedia 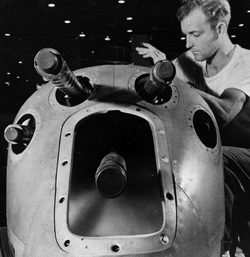 Concentrating all weapons in the nose made for a very destructive column of projectiles but also made striking one's target more difficult than having weapons dispersed on the wings.  Still, the inherent stability of the aircraft contributed to it being an excellent gun platform.  It was a feared adversary and was credited with downing more planes in the Pacific than any other aircraft.  Why the disparity in fighter performance between the Pacific and European Theaters?  A couple of factors contributed to Japan's poor performance compared to German pilots.  Many of Japan's best pilots were lost at the Battle of Midway in June, 1942.  These pilots were never adequately replaced because pilot training was reserved only for an elite few.  Also, while the Zero was a superior aircraft in the right hands it proved to be a very vulnerable fighter, having no armor protection for the pilot and containing highly combustible fuel tanks.  American incendiary rounds quickly set them ablaze.
Picture:  3000 x 2527 at 300 dpi - Wikipedia 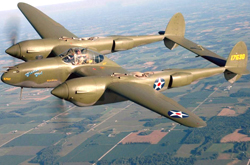 Two turbocharged engines provided great power but twin engine aircraft of the time lacked maneuverability.  The P-38 provided bomber escort for the Eighth Air Force until the P-47 and P-51 became available, providing more capable dogfighting ability.  The two factors that limited the P-38's fighter performance most were its slow roll rate and a restricted dive ability.  P-38s could not recover from a near vertical dive at high altitudes and opposing pilots used this to their advantage.  Despite this the P-38 Lightening was a deadly fighter-bomber and its speed and fire power often compensated for its lack of maneuverability.
Picture:  1024 x 768 - Wallpaper Pimper 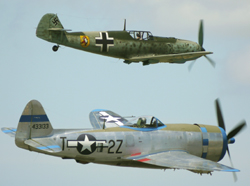