In five short years the Mustang had grown into a bulked up dragster from the wife's cute pony car.  With names like Mach 1 and Boss indicating who had the keys in their pocket the Mustang was determined to grab the tail of the Muscle Car era before it was lost in the exhaust.
Picture:  1440 x 900 - Muscle Car Wallpaper 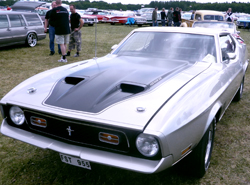 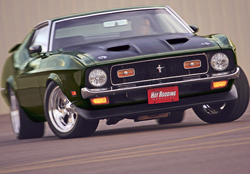 It was the largest Mustang ever.  Cars continued their trend of becoming bigger and heavier.  The Oil Embargo of 1973 with long gas lines, empty pumps, odd and even days for fill-ups and gas soaring well above forty cents a gallon put an end to all the fun.  Once there were gas stations everywhere, sometimes on all four corners of an intersection, and all competing for your business with customer service and free give-aways.  So what if your car barely got twelve miles to the gallon.  It's only oil.
Picture:  640 x 480 - Popular Hot Rodding 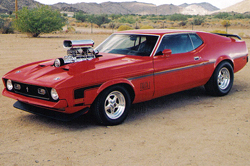 It says Mach 1 alright but what's coming through the hood definitely isn't factory equipment.  For some people four hundred horse power is just the starting point.  Of course, back then it was all rear wheel drive and with most of the weight up front getting traction could be tricky.  Don't ask about cornering.  These cars are designed for the quarter-mile straightaway and they don't deviate from the direction they were originally pointed.
Picture:  640 x 425 - Hooniverse 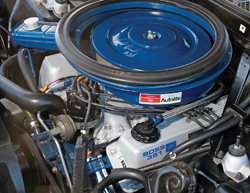 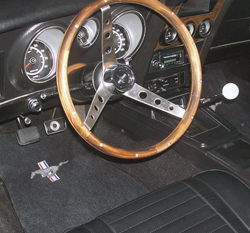 No hint of Martha Stewart here or Eddie Bauer for that matter.  It's just one hand on the wheel, one hand on the stick, hit the peddle with your foot and go - clutch, and go some more.  It's speed.  There is no scenery inside or out.
Picture:  900 x 600 at 120 dpi - Perfect Restoration 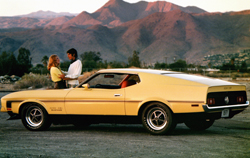 Honestly, it's hard to think of something that owning a Mustang Boss 351 won't remedy.  But if you do come up with something why not try a '66 Pontiac GTO.  These cars have the guts and you rake in the glory.  By the way, it's 1971 and you're no longer messing with 8-Tracks.  You've got yourself a 2 speaker, AM-FM stereophonic tape system as an available option.  Ka-ching!
Picture:  3000 x 2400 at 300 dpi - Mustang Showcase 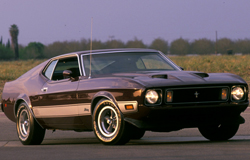 About forty years ago aerodynamics was more about style than the slipstream.  If you wanted fuel economy you bought a Beetle... and went twenty miles an hour up mountain highways.  Of course, Texas was our source of foreign oil then and no one gave global warming any thought, but if they had they would have thought it as science's next big advance for mankind.
Picture:  1920 x 1200 at 100 dpi - Damox 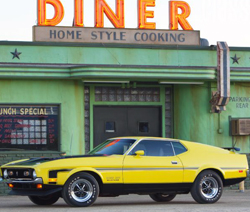 About twice the price of a Datsun 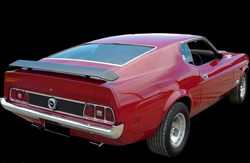 End of an Era


Can you image getting your hands on a 3,000 pound car with 475 horse power under the hood? Even with insurance it was affordable for many people.  You'd move to a state with no speed limit like Nevada or Montana, open it up and hope for the best.  It's called exercising your Constitutional rights.  Look it up somewhere in the first ten amendments - after guns.
Picture:  1024 x 768 - Muscle Car Wallpaper

MACH 1 429 SCJ
If that's not good enough you can order the Drag Pack option with all kinds of exotic high performance technology.  Be forewarned, though, there won't be room for air conditioning.  Solution:  roll down the windows and keep the speedometer at a steady 130 mph. 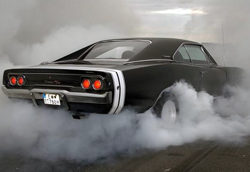 Posted by coldValentine at 6:12 PM