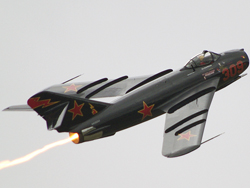 Design on the MiG 17 began in 1949 with the goal of improving the overall performance of the MiG 15, in particular to correct its poor handling at Mach 0.88 and above.  The new MiG had a longer fuselage and redesigned wings, a larger tail and the F model would receive an afterburning engine.  The above picture is 1208 x 659 and is posted at Pentax Forums. 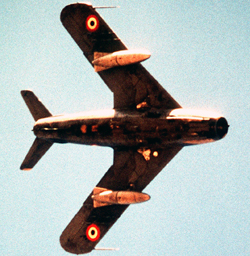 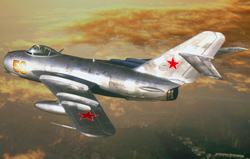 A larger, heavier jet with 50 percent more thrust but the same internal fuel capacity as the MiG 15 made it almost mandatory that the MiG 17 carry its two 600 liter drop tanks.  The MiG 17 was more than an upgrade of its predecessor and it had wide appeal, with over 9,000 built and many of them either exported or built under license by Soviet allies and other third world countries.  The above image is 1024 x 768 at 96 and is from MiG Luver.

In 1956 the Russians replaced the cannon on the MiG 17 with 4 radar guided air-to-air missiles and it became the first Soviet missile-armed fighter.  A decade later North Vietnamese piloting MiG 17s used cannon in close up engagements and, on rare occasion, downed missile armed American jets.  Air-to-air missiles often proved unreliable and the era of the dogfight had not yet passed into history.  The cutaway above is 1000 x 574 at 300 dpi and is from Image Shack.

With the exception of East Germany Soviet fighters exported to Warsaw Pact countries and Third World allies were downgraded models and did not contain the most advanced avionics.  None the less air forces ordering the MiG 17 received a high performance dogfighter that was relatively easy to maintain.  The above illustration is 1200 x 800 and is at Aircraft of World War II.  It was produced by Clavework Graphics. 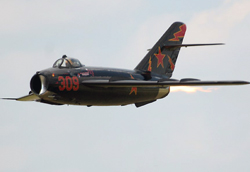 Like the MiG 15 before it and the MiG 21 that followed, the MiG 17 was basically a clear weather, short range interceptor designed to defend against western air strikes.  These MiGs were all highly maneuverable and their small size often made them difficult to see but their short range and light payload made them inadequate for combat roles such as ground attack.  The 980 x 700 image above is by Richard Seaman and the image is about half way down the page covering the 2005 Yankee Air Show. 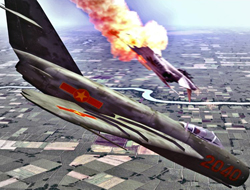 Lessons learned over the skies of North Vietnam directly led to the design and development of the F-16 Falcon, an agile but heavily armed fighter popular with pilots and purchasers in the export market.  American planes involved in Rolling Thunder such as the F-105 Thunderchief, or Thud, were not designed for close engagement with enemy jets and the heavy F-4 Phantom proved vulnerable to the quick strike tactics of North Vietnamese pilots.  More important, though, the dogfighting skills of American pilots had been allowed to lapse as Pentagon planners believed air-to-air missiles made close quarters combat obsolete.  The above illustration is 1124 x 702 and is from Image Shack. 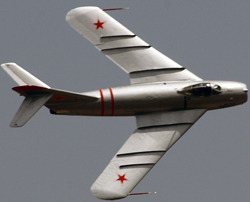 Ultimately the MiG 17 was not a match for American air power north of the DMZ.  Most North Vietnamese air combat victories were credited to the newer MiG 21.  Still, the older, outdated MiG of the 50s earned respect for its solid aerodynamic design and maneuverability when in capable hands.  The photo is 1200 x 800 and is from Wikipedia. 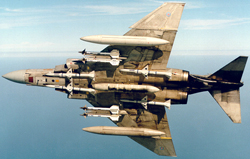 Posted by coldValentine at 7:52 PM