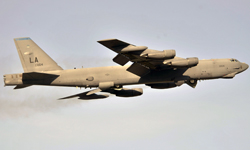 Developed as a high altitude strategic bomber carrying a nuclear payload the B-52 has undergone considerable changes in its fifty year history reflecting changing technology and, most significant, the end of the Cold War.  The above image is from Wikipedia and is 2700 x 1792 at 300 dpi. 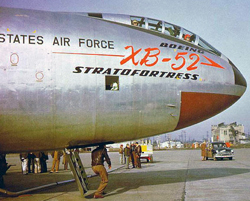 
The original prototype B-52 that rolled out in 1952 had tandem seating for the pilot and co-pilot.  The arrangement was quickly changed to side-by-side with the B-52A. 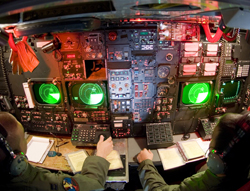 
There remain 94 B-52H bombers in the USAF.  All other versions of the bomber have long been retired.  Their role since 1991 has been primarily conventional as opposed to providing nuclear deterrence.  The H model's range has increased to 15,300 km / 9,600 miles and its crews now train for low level night time approaches to their target as a counter to radar detection and the threat of surface-to-air missiles, SAMs.  The above photo is from Wikipedia and is 3000 x 1993 at 300 dpi. 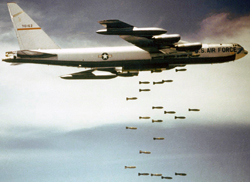 Operation Arc Light was the use of B-52s over Vietnam.  The program began in June, 1965 and was initially limited to targets in South Vietnam.  By April of the following year B-52s began bombing targets in North Vietnam as part of Operation Rolling Thunder.  Eventually targets were clandestinely added in both Cambodia and Laos.  The effort culminated with the bombing of Hanoi in December, 1972.  The final B-52 sortie occurred January 28, 1973 - the day a cease fire with North Vietnam was signed.   The above image is 1441 x 1047 and is from Wikipedia. 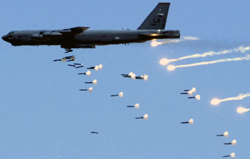 Parachuting bombs enable the low to the deck attacking aircraft time to escape potential blast damage.  The flares are a countermeasure to ground fired heat seeking missiles.  The downing of an American U-2 over the Soviet Union by a SA-2 surface to air missile in May, 1960 spelled the end of the B-52 as an effective high-altitude strategic bomber.  The versatility of the B-52 as a weapons platform has enabled it to survive the end of the Cold War.  The above picture is from Wallpaper Base and is 1280 x 1024 at 300 dpi. 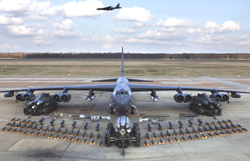 There is nothing in the American arsenal that matches the capability of the B-52 to deliver 30 tons of conventional explosives to a target over 4,000 miles away.  This is the main reason why it is expected to remain in service for another couple of decades.  The photo above is 2994 x 1998 at 300 dpi and is located at War Chapter. 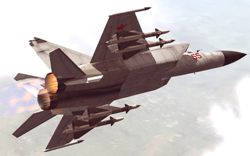