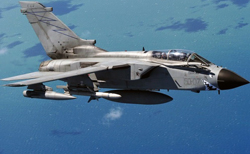 The all-weather, low-level strike aircraft Tornado was the joint effort of the UK, Italy and Germany initiated in the early 1970s in the midst of the Cold War.  With nearly 1,000 aircraft produced the economies of scale made up for duplications in the multiple country effort.  Variations were produced to meet the different country's specific needs.  The photo is 800 x 600 and is at SiaPhoto. 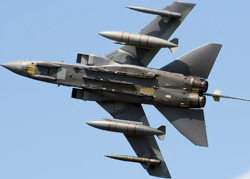 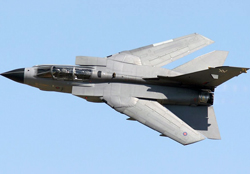 The Tornado is designed for optimized flight at three wing positions:  25 degrees with wing slats and flaps extended provide high lift for short take off and landing capability; 45 degrees for normal flight operation; 67 degrees to achieve maximum speed.  The photo is 1100 x 775 and is posted at Reddit. 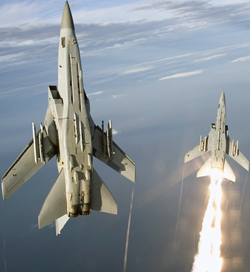 Built for rapid, low level penetration of enemy airspace the Tornado remains, after thirty years, the backbone of Britain's air strike capability.  Coming in close to the deck to crater the runways of Iraq's heavily defended airbases contributed to the loss of six Tornados during Desert Storm. Piloting your nation's most advanced combat aircraft means being assigned missions with the highest risk.  The photo above is from Patrick's Aviation. 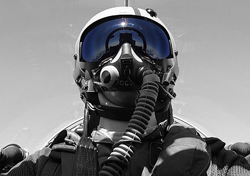 The Tornado was intended to come in low, under the cover of darkness, even adverse weather and strike its target with precision.  It's not a nimble craft.  Don't expect the upper hand in a close quarters dogfight.  It's fast but massive and has lumbering brutish power.  But lumbering doesn't describe the ride you feel flying tree top level through mountain passes at nearly 1,000 kph / 600 mph... in nasty weather.  It's that good.  Blistering thrust, cutting edge avionics and reliable terrain following radar are packaged in the Tornado.  The picture is 640 x 426 at 180 dpi and is from a posting on Flickr. 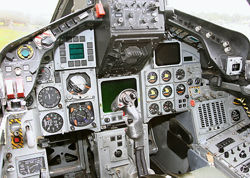 Even with a weapons officer riding tandem there is no lack of things to know, monitor and do while piloting the Tornado.  There's a steep learning curve that goes with moving into this cockpit from a less sophisticated aircraft.  Looking at it another way it's sitting in your favorite arm chair with all your toys carefully arranged in front of you.  Don't bother me.  I'm having fun.  The photo is from Air Team Images and is 600 x 420. 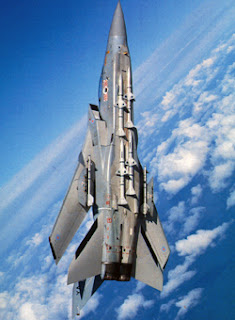 The above photo displays the ordnance of a Tornado ADV, designed during the Cold War to intercept Soviet long range bombers and destroy them before they could fire their stand off missiles at British targets.  The missiles nestled tight against the fuselage are BAe Sky Flash radar guided air-to-air missiles.  The wing mounted missiles are heat seeking Sidewinders.  The image is 611 x 788 and is posted at Reddit. 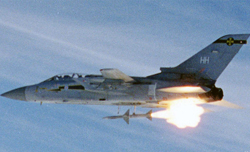 The HARM, or High-speed Anti-radiation Missile, is an air-to-surface missile that follows the electronic transmission of a radar system to its source and detonates.  Defense suppression is another role of the Tornado along with air interdiction, close air support of troops. high value target ground attack, maritime anti-ship patrol, and reconnaissance.  Each of the varied combat missions has its own weapon specific to the task.  The image is from Military Today and is 1024 x 538. 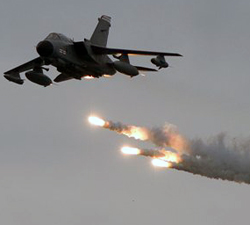 
Low level ground attack means vulnerability to small arms fire and shoulder launched heat seeking missiles.  Flares are a reliable counter to the latter.  With precision weapons and stand off missiles that are accurately launched at considerable distance from the target, low to the ground flight tactics aren't the necessity once required of Tornado pilots.  Still, like dogfighting, these are skills that remain in the training because warfare is a venture that often defies prediction.  The photo is 500 x 332 at 96 dpi and is from Flight Global. 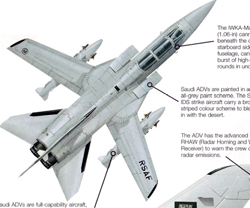 Saudi Arabia has three squadrons of Tornados adding to the F-15Cs they already have in the role of air defense.  The aircraft are not the junior version often found in export sales but are as capable as any Tornado found in the RAF.  Saudi Arabia was the only country outside the original three manufacturing nations to receive the Tornado.  The 1435 x 903 graphic is from Wings Palette. 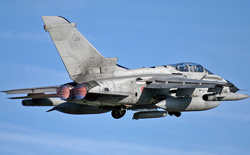 
The Tornado was used in the recent Libyan engagement and it has so far avoided retirement.  But plans are to replace it with the Eurofighter Typhoon and, later, the F-35 Lightening as it becomes available.  The question is what follows this next generation of combat aircraft?  With the rapid technological advances of UAV, Unmanned Aerial Vehicles, what role will on-board pilots have in future aviation?  For instance, a human may tolerate a 9 G force but an aircraft can handle far more.  We aren't yet to the point of turning mission critical assignments over to machines, software and an individual in a cubicle with a joystick.  But as technology progresses human biology will increasingly become the glaring limiting factor and the lone pilot in a cockpit will join the cowboy on the range and the white knight on horseback as another romantic image for the ages.  The above picture is 1024 x 678 and is at Military Today. 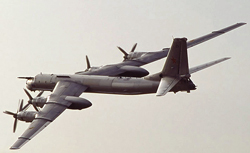