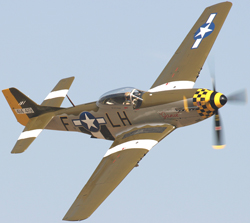 The arrival in late 1943 of Mustangs powered by the Rolls Royce Merlin engine enabled the Eighth Air Force to resume the daylight bombing of Germany it had suspended in October of 1942 due to unacceptable losses.  Much as the Spitfire is best remembered for its role in the Battle of Britain so too the legacy of the P-51 will be forever linked to its contribution in enabling long range Allied strategic bombing despite withering German opposition.  The above photo from Scenic Reflections is 1024 x 768 at 463 dpi. 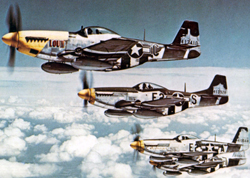 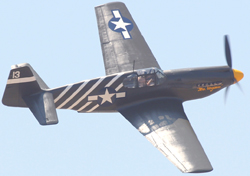 The original P-51A Mustang was unacceptable as a fighter because of its under-performing Allison engine and it was assigned the role of fighter-bomber.  Pilots also complained about their limited visibility with the cockpit design.  Both problems would be remedied with the subsequent P-51B.  This 1152 x 864 photo was taken by Richard Seaman. 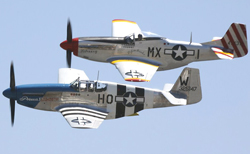 Richard Seaman caught this side by side comparison of the two major Mustang versions while photographing the 2010 Chino Air Show.  The image is 850 x 559 at 300 dpi. 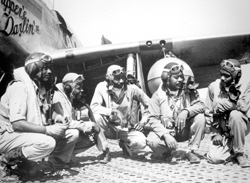 The 332nd Fighter Group is probably the most famous group of American aviators from the Second World War.  Although they flew several fighter types, including the P-40 Tomahawk and P-47 Thunderbolt, they are best remembered for their distinguished service escorting American bombers over Germany in the P-51.  This photo of a few of their aviators is 3202 x 2400 at 300 dpi.  It is found on Wikipedia. 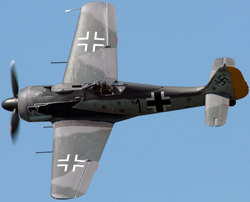 COLD VALENTINE
Posted by coldValentine at 11:45 AM