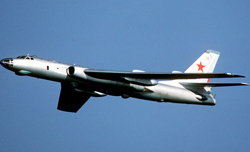 Developed in the early 1950s the Tu-16 was the Soviet equivalent of the American B-47.  Its two large engines produced thrust equivalent to that generated by the six J47 engines on the Boeing.  It had a very good airframe and it was adapted beyond the bomber role over the years to include maritime reconnaissance and aerial tanker.  The above photo is 800 x 550 and is from Military Factory. 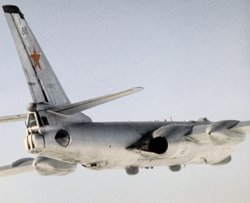 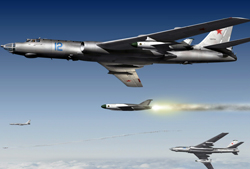 Any hope the U.S. had of preventing Western Europe from being overrun by Warsaw Pact conventional forces required maintaining open sea lanes with North America.  The Tu-16 armed with the AS-6 'Kingfish' long-range nuclear missile threatened to knock out America's carrier battle groups in the Atlantic.  A scenario such as this would quickly lead to an exchange of ICBMs between the two warring super powers.  The resulting destruction of the two society's cities and industrial capacity rendered these actions suicidal.  The illustration is 1000 x 667 at 28 dpi and is by Johan Franken. 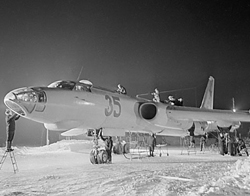 A freezing winter night and this Russian ground crew is doing what needs to be done.  When you hear talk of military readiness think of measures such as these.  Critical military assignments wouldn't be described as comfortable or convenient by those charged with carrying them out.  The photo above is 600 x 392 at 96 dpi and is from Air Force, Russia. 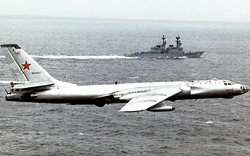 Always snoop, always test the readiness of the other side.  This would be a familiar sight during the Cold War.  The pods beneath the wings of this Tu-16 reveals its mission of ELINT - Electronic Intelligence gathering.  Additional reconnaissance capability is provided by the bubbles seen under the fuselage.  It may seem a bit unnerving to Navy ships but this Tu-16R isn't the lethal Tu-16K-10, armed with ship-killing missiles.  The picture is 849 x 503 at 300 dpi and is from Global Security. 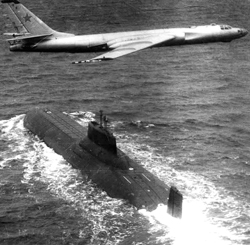 This Badger is flying over the very large Russian Typhoon Class missile-firing nuclear submarine.  These are the largest submarines ever made and they house 20 missiles.  The protrusion from the end of the Tu-16's wing is for aerial refueling - a unique wingtip to wingtip method of transferring fuel between a Tu-16N tanker and the Badger.  The photo is 600 x 800 and is at Webshots. 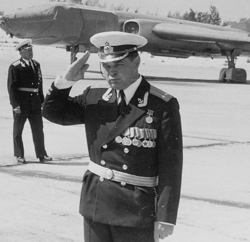 A typical Badger crew consisted of pilot, co-pilot, navigator and flight engineer in the front crew compartment and a ventral and tail gunner in the rear compartment.  Reconnaissance Tu-16s may well have an addition two to three crew members dedicated to intelligence gathering.  The above Badger has an enlarged radome for improved search and target tracking.  The photo is 1348 x 1004 at 300 dpi and is from Panoramio. 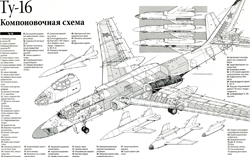 The Tu-16 lasted twenty years beyond its contemporary, the B-47, because it proved to be a versatile platform.  It was designed to deliver the Soviet Union's largest nuclear weapon but its limited range prevented it from being a true strategic bomber.  Several Tu-16s were sold to Egypt over the years.  The initial group was mostly destroyed on the ground by Israeli pilots at the beginning of the 1967 Six-Day War.  The Tu-16 fared better in the 1973 Yom Kippur War as they were able to launch 25 missiles at Israeli targets.  The 1742 x 1210 at 96 dpi graphic above is from Soviet Hammer. 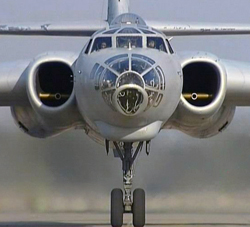 China built the Tu-16 under license and is the only country known to continue operating this aircraft.  Besides Egypt, Iraq and Indonesia had also purchased the Badger for their air force.  The Tu-22 Blinder was the intended replacement for the Badger  but while it was faster its range was disappointing and production was limited.  Some of the Blinders would eventually be sold to Libya.  The photo is 683 x 537 and is posted at Reddit. 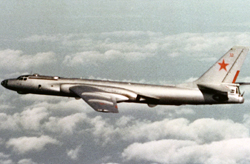 The Tupolev Badger was a swept wing bomber that retained World War II concepts with a tail gunner and both dorsal and ventral gun emplacements like those found on the B-29.  Germany's defeat in 1945 eliminated the need for cooperation between the wartime allies, Russia and the United States.  The rivalry between the two dominant powers extended beyond ideological differences.  The tension of the Cold War has abated but frictions will remain between the two nations as demonstrated by their competing interests with countries like Iran.  China has grown in global stature as has Western Europe.  The 21st Century has begun much like the first years of the 20th Century when newly powerful nations confronted established nations for greater access to economic resources and increased political influence.  It remains to be seen whether the upcoming jostling for dominance can be limited to peaceful competition.  The picture above is 2585 x 1832 at 259 dpi and is at Ramapo College. 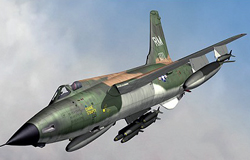