The F-8 is the result of Navy specifications in 1952 for a supersonic carrier based fighter to provide fleet defense.  It first flew in 1955 and with its Pratt & Whitney J57 engine it was soon able to attain speeds over 1600 kph / 1000 mph.  It was the last American fighter whose primary armament was cannons and not missiles.  The photo above is 1124 x 715 at 300 dpi and comes from Flying Billboard. 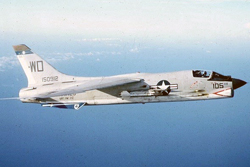 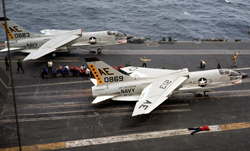 The stress of carrier operations on aircraft means stronger airframes, more robust landing gear, additional equipment and greater fuel capacity.  The additional weight alone compromises performance so it is unusual to have a jet designed for the Navy outperform its Air Force counterparts.  As a fighter the F-8 compares very favorably with the F-100 and the F-105 although the Thud 105 was a workhorse in the ground attack role as well, something the Crusader could do in a limited capacity.  The above image is 4979 x 3620 at 96 dpi and it is from Wikipedia.

Older Essex Class carriers retained the F-8 for fleet defense even after its replacement, the F-4 Phantom, came into service because the Phantom's greater size and weight wasn't compatible for smaller carriers.  Moving from single engine jets to those with two engines certainly added weight and fuel consumption but it also ensured that the flame out of one engine did not necessarily result in an expensive jet and pilot being lost in the drink.  The new F-35 returns to a single engine but, presumably, they will prove more reliable than engines powering the early years of jet aviation.  The above image is from Wikipedia and is 740 x 485 at 96 dpi. 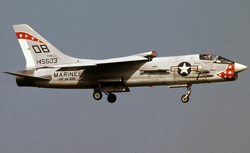 Unique to the F-8 is the wing's ability to pivot up on both take off and landing in order to increase the plane's lift when it needs to be airborne quickly and slowing its rate of approach when landing.  The angled wing also enables the fuselage to remain relatively level, providing the pilot a better view of the carrier deck.  Despite this the jet remained difficult to land because of its speed instability.  The image is 1030 x 715 at 300 dpi and is from Flying Billboard. 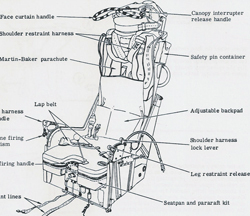 You did not need to be shot down over North Vietnam to find the ejection seat a life saver.  Over 500 of the 1200 F-8s built were lost to accident.  Riding cutting edge technology at blinding speed is always risky business.  The labeled graphic above is 981 x 1200 at 96 dpi and is from Cybermodeler.

This F-8 pilot has been abruptly transferred to a secondary, less acceptable, means of conveyance.  Ejection is not a simple matter.  Everything must work as designed - the canopy separates from the craft, the seat ejects properly, your limbs strike nothing on the way out, you separate from the seat and the chute deploys in a satisfactory manner.  In most instances you'd probably prefer being over land, as well.  This 675 x 355 image is from Project Get Out and Walk. 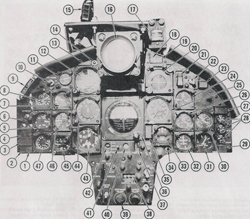 There's a lot here to learn until it becomes second nature.  But in a close in dogfight there is no time to survey the numbers.  Your head is swiveling constantly about, your struggling with g forces that increase your body weight to 7, 8 and 9 times normal.  Who sees who first often determines who finds themself stuck in flaming wreckage hurtling toward earth.  The F-8 scores high marks on agility but its pilot relied on his wingman to provide the eyes for his blind backside.  The labeled photo is 939 x 1200 at 96 dpi and is from Cybermodeler. 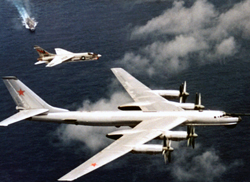 This F-8 was scrambled from the USS Oriskiny, seen below, to accompany the Tu-95 Bear beyond its reconnaissance target.  Each side was always in the act of probing, testing and spying on the other throughout the duration of the Cold War.  An entire generation has grown up without appreciating the significance of two nuclear superpowers always poised face to face, toe to toe, each determined never to flinch.  The image is Wikipedia and is 2279 x 1670 at 286 dpi. 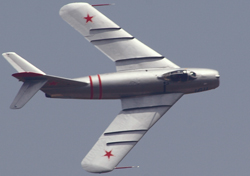