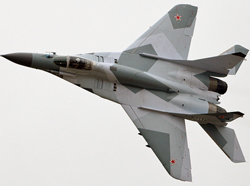 The MiG 29 was initially developed in the 1970s as a high performance lightweight fighter to supplement the long range fighter-bomber role of the Su 27.  In recent years modifications have been made to give the MiG 29 greater range and larger payload along with avionic updates to better compete with the F-15, F-16 and FA-18 in BVR (Beyond Visual Range) weapons systems.  The above photo is 1000 x 666 and is from Aviation News. 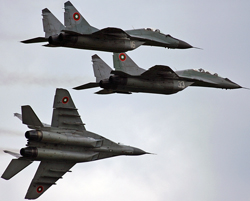 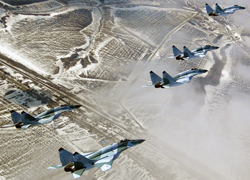 The mission of the MiG 29 was primarily to protect the Su 27 in its ground attack role from F-15s and F-16s in the European Theater.  The MiG's agility gave it unsurpassed close-in dogfight capability.  It was designed to utilize rough air fields made available to it by advancing Warsaw Pact forces.  The photo above is 1024 x 701 at 300 dpi and is by Anton Pavlov.  It is posted at Air Force, Russia.

The louvered intake above the wing is the alternative air flow into the engine used during taxiing while special doors close off the main air intakes, preventing debris from being ingested.  This feature above the strakes is absent in newer models.  The image is 1920 x 1200 and is from Zeus Box. 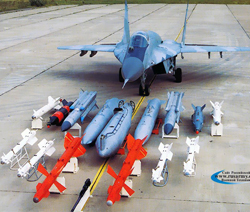 The ordinance displayed indicates the nature of the MiG 29 is one of maintaining air supremacy over the battle field.  The Sukhoi Su 27 in ground attack mode would be vulnerable to attack from the air without the protection provided by the MiG 29 as a dedicated dogfighter.  The image is 800 x 600 at 300 dpi and is from Reddit. 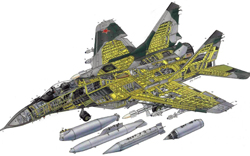 Newer models of the MiG 29 have a hump along the spine behind the canopy where avionics have been moved to provide for greater internal fuel storage.  A retractable refueling probe has also been added to boost its limited range.  This 1667 x 991 diagram is posted at a forum on SMCars. 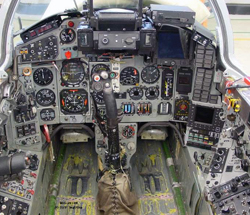 Newer MiG 29s have a glass cockpit equipped with LCD and MFD (Multiple Function Display) in place of the original analog dials shown here.  A new canopy provides better visibility and weapons aiming is aided by a HUD and a helmet-mounted system.  The photo is 800 x 600 at 300 dpi and is from German Airforce Sammlernet. 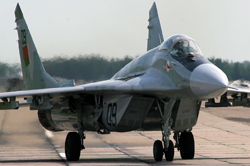 This taxiing MiG 29 displays its larger spine, or hump, behind the canopy.  An aircraft already known for its superb aerodynamics is attempting to match the sophisticated electronics of its competition.  The photo is by Dmitriy Clerks and is 1200 x 800.  It is posted at Air Force, Russia. 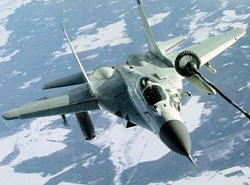 Providing for IFR (In Flight Refueling) indicates an expanded role for the MiG 29.  The aircraft's designers, Mikoyan-Gurevich, are adapting the fighter to the world's changing political realities and tactical needs.  With the demise of the Soviet Union economics plays an increasing role in the marketing of aircraft design.  The image is 600 x 387 and is from MiG-29. 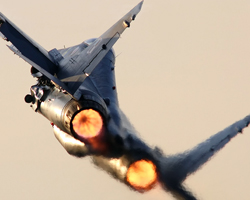 Poland is an enthusiast of the MiG 29 having purchased additional aircraft from former Warsaw Pact countries Czechoslovakia and Germany.  Like the strakes along the side of the fuselage the widely separated engines aid in low speed maneuverability while minimizing the penalty of high speed drag.  The image is 1600 x 1200 at 350 dpi and is located at Military Modeler. 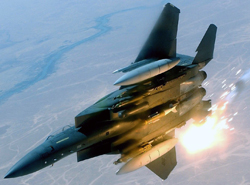