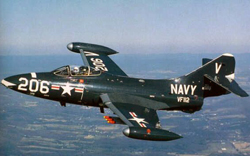 Although the F9F Panther and F-86 Sabre were developed at the same time they were a generation apart because of the reality of landing a jet on a carrier designed to handle prop planes.  The straight wing Panther was no competition for the MiG 15 and was limited mostly to ground support during the Korean War.  It proved both rugged and reliable as the Navy's first real carrier jet.  The above 600 x 394 image is from Aviation History. The first years of carrier jet aviation came shortly after the end of World War II when experienced personnel were returning to civilian life and money for defense was drastically curtailed.  The war in Korea reversed this dynamic as conventional warfare again became a reality in a time of nuclear deterrence.  The atom bomb did not prevent North Korea's invasion of the south nor did it intimidate China when they confronted American forces on the Korean peninsula.  An era of wars with limited objectives became the new reality.  To Washington policymakers the wars in Korea and Vietnam were not just about blunting the spread of Communism but it also had to do with maintaining credibility.  Was the U.S. actually willing to defend Western Europe despite the threat of nuclear war?  America's strategic nuclear force was of little threat if the nation's leaders didn't indicate by their actions a willingness to use them.  The photo above is 450 x 441 at 96 dpi and is from RC Universe. 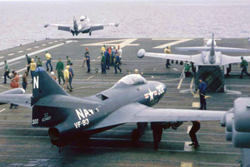 Jet aircraft require far more fuel than their propeller predecessors yet they flew from World War II carriers without provision to make up the difference.  This was to be a constraint on flight operations during the course of the Korean War.  The photo is 1405 x 866 and is from Wikipedia. 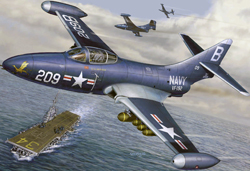 In just over two months American and UN troops had been pushed back from the Yalu River along the border with China all the way to the 38th Parallel near the South Korean capital of Seoul.  Air supremacy over the battlefield was an important factor in bringing the advance of Chinese troops to a halt.  Although the F9F was obsolete in its intended role as a fighter it did prove to be rugged and effective in ground support.  The 1772 x 1181 illustration at 300 dpi is from Military Photos. 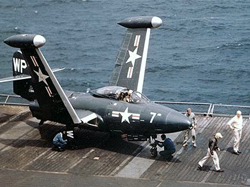 Once the F9F is brought to the flight deck it is launched as quickly as possible.  Every minute its jets burn prior to launch reduces its range by 5 kilometers or about 2.5 miles.  Catapults were new at the time and limited in capability.  Unfavorably still wind could mean reducing ordnance until the appropriate launch weight was met.  The hardware was new and new also to the personnel using them.  It was on the job training, the school of hard knocks.   Yet, it went remarkably well.  This photo is 740 x 587 at 96 dpi and was taken in 1950 aboard CVB-42, Franklin D. Roosevelt.  It's posted at Wikipedia. 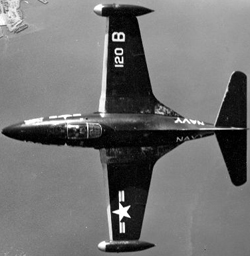 Angling the wings 35 degrees on the upgraded F9F Cougar added another 160 kilometers or 100 miles an hour to its speed.  Although the Cougar benefited from an improved engine none of the F9Fs  were ever equipped with afterburners.  The 550 x 438 image is posted on Flickr. 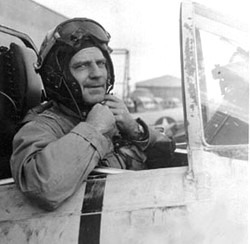 A few short years after the end of World War II a number of pilots found themselves once again climbing into the cockpit.  While P-51 Mustangs, F4U Corsairs and Skyraiders were still in use it was quickly apparent that Korea marked the beginning of the age of jets.  Now you were flying at twice the speed and given half the time to make life or death decisions.  This is a photo of Marine ace Philip DeLong and is 300 x 400 at 300 dpi.  It is available at Aviation Art Store.

A carrier is not an airport.  It's short, rapid take offs and abrupt landings.  The aircraft need to be of lightweight materials yet remain structurally strong to withstand the stress of carrier operations.  They need power for speed and plenty of fuel for the ranges required when operating at sea.  The design of a carrier jet is the result of finely balanced engineering trade-offs.  It is rare to find a plane that meets the expectations of both the Air Force and the Navy.  The picture above is 3000 x 2328 at 300 dpi and is from World War II Database.

The extended nose on this aircraft and window on the side of the fuselage shows this F9F has been modified for photo-reconnaissance.  Close to 1400 Panthers were built and by 1958 they had all been retired.  The early days of jets was like the early days of any emerging technology.  By the time they were released into active service they were already obsolete when measured against the new aircraft in testing.  The photo above is 998 x 506 and is at Flight Sim Pilot Shop. 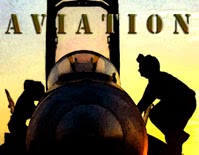 Posted by coldValentine at 5:50 PM