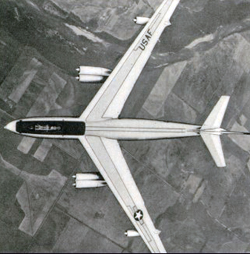 The B-47 was the first American all jet bomber.  German wartime research contributed to the swept wing design of both the F-86 Sabre and this medium range bomber.  It was truly a revolutionary aircraft when first flown in December, 1947 and its experience would heavily influence the design of the legendary B-52 introduced a few short years later.  The picture is 352 x 334 and is at Aviastar 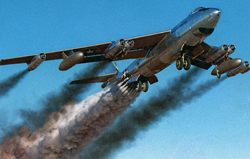 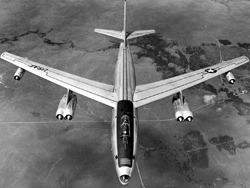 The B-47 had limited internal fuel capacity and was not a true intercontinental bomber without IFR (In Flight Refueling).  This capability was added to the B-47B model along with two 1500 gallon drop tanks attached to the wings.  Each wing of 45 bombers was expected to also have 20 KC-135 tankers to extend its range.  The KC-135s had incompatible piston engines making air refueling difficult for the born for speed Stratojet.  The above picture is from Cybermodeler and is 1200 x 883 at 300 dpi. 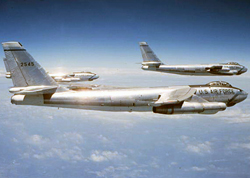 The Strategic Air Command had 28 B-47 wings by the mid-1950s, not including the over 200 Stratojets used for reconnaissance missions.  The first B-52s began supplanting this force after 1955.  By 1960 the Air Force was phasing out the remaining B-47s with the new B-58 Hustler but numerous other factors including ICBMs and Polaris submarines made the medium range B-47 an expendable weapons system.  This 800 x 535 image is from Military Images. 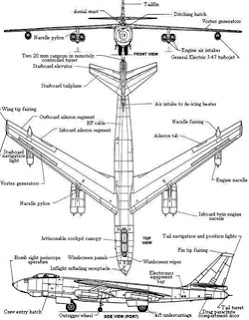 The 35 degree swept back wing was too thin to house landing gear which led to the bicycle arrangement along the center line of the fuselage.  Landings required concentration and could be particularly treacherous in a crosswind.  The B-47 was a demanding aircraft to fly and left pilots worn out after long flights.  The diagram is from Todo Aviones and is 552 x 768 at 128 dpi. 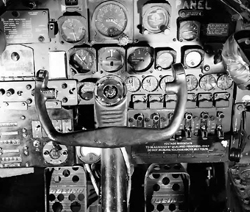 The B-47 was a challenging plane to fly and tandem seating meant the two pilots could not see what the other was doing thus making crew coordination, rigorous checklist communication, all the more critical.  The large Plexiglas clamshell canopy provided an excellent view but made daylight flying extremely hot unless the navigator, buried in the nose, was left to freeze from air conditioning.  Little thought was given to crew comfort but as an aircraft it had the reputation for handling like a fighter.  The photo is 846 x 700 at 300 dpi and is from Grissom Air Museum. 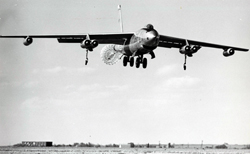 There were two chutes deployed on landing, an approach chute as seen above and a brake chute once landed.  This landing photo is 2804 x 2217 at 300 dpi and is from Lincoln Air Force Base Museum.

Engines of the early jet age lacked power output and several were required.  Take offs with heavy payload were assisted by the additional boost of 18 solid fueled rockets located aft of the bomb bay.  Rocket assisted take off and parachute deceleration enabled B-47s to be more diversely stationed at air bases with shorter runways.  The image is 1348 x 536 and is at John Weeks.

Range was the primary limitation of the B-47 and many were based in England, Spain, North Africa and Alaska in order to be in striking distance of the Soviet Union.  The image is from Airports Worldwide and is 600 x 219 at 200 dpi. 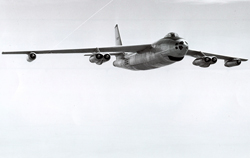 For the first couple of years following its introduction the B-47 could fly faster and higher than contemporary fighters.  It had an agility in handling unexpected for a bomber.  Its qualities made it the choice for highly dangerous reconnaissance missions into Soviet airspace prior to the U-2 during the early years of the Cold War.  The photo is from Stellar Views and is 1200 x 911 at 300 dpi. 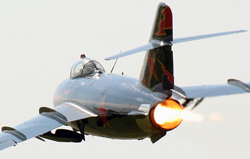